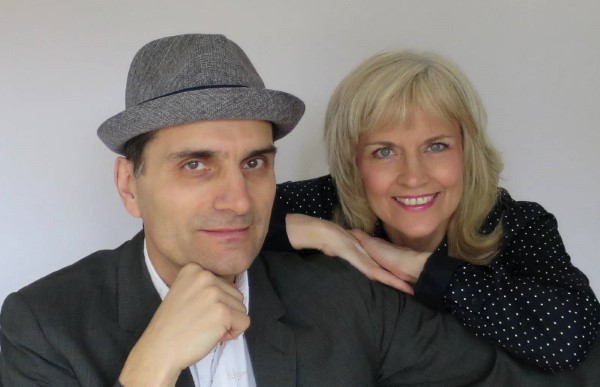 Winnipeg-born, Toronto-based duo, Sue and Dwight are unveiling their new delightful single, “Sweet Potato Fries” tomorrow, but we have the exclusive for you today! Featuring artists Ken Whiteley (on the jug, banjo, washboard, and as mixer), and Chris Whiteley on harmonica, it’s a slight departure from their more socially conscious material, but a fun romp in their same folk-roots style.

With three full albums and a number of singles under their belt, they also tour, which has taken them further afield to other parts of Ontario and Western Canada.

The new single is a classic folk-roots, Americana tune and takes a bit of a turn from their usual more topical content but still maintains the personal experience concept.

Sue explains, “About 10 years ago, we noticed that sweet potato fries, a southern delight, were showing up on more plates at our gigs and on more menus, the next big thing in pub grub. Dwight became a bit obsessed with them diet-wise and creatively. We felt a down-homey homage was in order and wrote the song pretty quickly, one part recipe and one part love song.”

They listened to some old Gus Cannon Stompers tracks too and brought that style into the arrangement. The result is Sue and Dwight cookin’ up a swingin,’ catchy little ditty with an irresistible washboard rhythm and a sprightly harmonica. Attentive listeners will even be rewarded with a tip on how to cook ’em – in Sue’s suet. This is real down-home, front porch music, guaranteed to raise a smile and get your toes a tappin.’

Check out “Sweet Potato Fries” below, and find out more about Sue and Dwight via our mini-interview.

We are singer-songwriters, Winnipeg-born and Toronto-based, whose work focuses on themes of peace, courage, and social justice. Although we were born too late to be part of the folk revival of the 1960s our music embodies the spirit of that time.

While we have one foot planted solidly in folk music, we also comfortably step out into pop, gospel, and the blues. We refer to our style as ‘contemporary folk music with a few twists’ and Sweet Potato Fries certainly falls into the latter!

If you like harmonies and acoustic guitars, you’ll probably be attracted to what we do. All our music and more is on our website.

You recently unveiled your new single, “Sweet Potato Fries”, what can you tell us about the writing process for the track?

Dwight’s a big country-blues fan, Mississippi John Hurt, Brownie McGhee, Gus Cannon, to name a few. About 10 years ago, he noticed that sweet potato fries, a southern delight, were showing up on more plates at our gigs and on more menus, the next big thing in pub grub. He gave them a try and became a bit obsessed with them dietarily and creatively. He felt a down homey homage was in order and wrote the song pretty quickly, one part recipe and one part country blues.

Given the fries’ southern connection, Dwight wanted to give the lyrics a ‘down home’ feel or vernacular. It also seemed to cry out for jug band feel so we listened to a few old Gus Cannon Stompers tunes to bring that into the lyrics. The song is basically a country blues tune with an alternating bass line on the guitar.

Dwight thought it would be fun to include an actual recipe for making fries in the song. He got the idea from Brian Wilson’s song Busy Doing Nothin’ which included the actual directions to his house. He liked the idea of a practical pop-up in a creative piece.

It would nice like to say that we found a recipe on a yellowed piece of paper in an old antique kitchen table drawer in Alabama but the actual recipe came from a Google search in Toronto.

You worked with Canadian roots music legend, Ken Whiteley and his brother Chris on the track, how was that experience?

While our musical paths have crossed on stages, this is the first chance we’ve had to work with Ken in the studio. It was a real treat.

When it came to recording, we wanted to do the full Gus Cannon Jug Band treatment. Jug playing and recording is harder than it looks though! After experimenting fruitlessly for days with about a dozen different jug bottles and mics, Dwight put in an SOS call to Ken who can play just about any instrument. He offered some great suggestions the best being that he could
give it a shot. He was a whole jug band in one and tapped in his brother Chris on harmonica for good measure. Great suggestion Ken!

The song is a classic lockdown production recorded in October 2021. We live in a different neighbourhood than Ken here in Toronto. We recorded the vocals and guitar at our own home studio and Ken did the rest at his. Through a series of file transfers, Ken mixed all the tracks, and voila the Fries were ready.

You have been doing virtual shows entitled Livingroom Live, how did the idea come about?

We just played our 100th Livingroom Live Show last night April 27, it’s been quite a ride.

When the Lockdown started in March 2020, all our live gigs dried up as they did for all musicians. We wanted to keep playing though. One day while rehearsing in our living room, the idea just clicked that we should Livestream from this room.

The biggest challenge was learning how to Livestream properly, all the tech stuff like why you need an Ethernet cable. It took us almost 2 months to upgrade our Internet service and iron out all the kinks before the first show.

We planned the show as a very relaxed intimate hour or so of us playing our songs and a few covers and talking to our friends. It gave listeners and ourselves an escape from all the COVID and political turmoil at the time and really took off. We’ve listened to our audience and have stuck with that approach and expanded across North America and even into Europe.

Obviously, I have to ask you, what’s your favourite meal to enjoy sweet potato fries with?