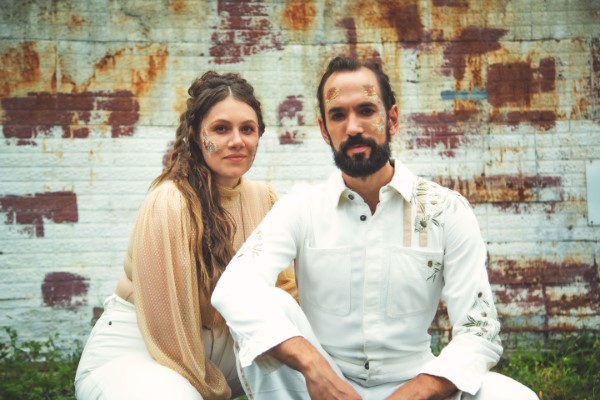 Stingray Rising Star, SOCAN, and Trille Or Award-winners, Moonfruits is comprised of Kaitlin Milroy and Alex Millaire. The two are bilingual makers of contemporary folk music and have unveiled a new single “Atoms of the Apartment,” the first from their upcoming album Salt.

The single drops on April 29, 2022, but we’ve teamed up with Moonfruits to share it ahead of time via an exclusive premiere!

Moving from a grungy ’90s electric guitar to a vibrant crescendo of strings, horns, and synths, “Atoms of the Apartment” follows the unifying thread of the unique, charming vocal interplay between Milroy and Millaire – with a lesson in quantum physics as well.

On tour with a sleepy bandmate – Kaitlin – and a perpetually broken car radio, Alex’s mind wandered to a coffee table book borrowed from his grandparents-in-law, a never-before-opened tome from the ’70s called The Drama of the Universe. Billions of years of universal history dorkily divided into the acts of an opera.

“A song idea began percolating then and there, and the nerdy, upbeat love song to their apartment took root,” says Millaire.

“Atoms of the Apartment” is a driving, chamber-orchestra-backed tune from Ottawa’s astral folk duo, Moonfruits – a kaleidoscopic ode to the quirks (and quarks) of home.

Check out the video for “Atoms of the Apartment” below, and find out more about Moonfruits via our mini-interview.

Hello! We are Kaitlin and Alex, also known as Moonfruits. We live on the unceded, unsurrendered Territory of the Anishinaabe Algonquin Nation, also known as Ottawa. We’re avid fans of trees, we love to cook, Alex, in particular, is a cocktail enthusiast and, of course, we love to make music together. We met at an open mic in 2012 at Mugshots, in the now-closed Jailhouse Hostel bar. Kaitlin sang a cappella on stage, and we found ourselves wrapping up the night with a lingering jam in the parking lot. We’ve been weaving our lives, songs, and stories together since, singing, so far, in French and in English.

You recently unveiled your new single, “Atoms of the Apartment”, what can you tell us about the writing process for the track?

Alex: We were driving back from a gig… somewhere, and, with Kaitlin asleep in the passenger and a broken car radio, my mind went wondering to a coffee table book that I had borrowed from my grandparents-in-law, a massive tome from the 70s called The Drama of the Universe – divided into the acts of an opera, no less – that I positively devoured. I got to thinking about the atoms of my body, of Kaitlin’s, of our cat Sully’s, and everything they had been before (briefly) being us. That train of thought led me to the house we were renting, and not only what all those atoms had been before becoming a house, but all they had seen. I chose ‘Atoms of the Apartment’ more so lyrically than lyrically, but then it became all the more appropriate once we moved in to our very own place, just the three of us, and especially so in the pandemic when we got to spend so much time here, and not on the road.

Back to that drive, ‘the atoms of the apartment’ became a kind of lyric motif that I would just tack a different ending onto, mostly to amuse myself and stay awake. Somewhere in all that canadian shield and trees a melody started dancing around the lyrics, and before I knew it a tune was starting to take shape. Kaitlin and I worked for months in our wee apartment honing the vocal arrangements first before tackling the instrumental landscape we heard in our minds, Kaitlin’s verse part never coming back twice the same way, that we felt served this idea of constant evolution.

Sonically, ‘Atoms of the Apartment’ is among our most ambitious tunes to date, with a whole chamber orchestra’s worth of instruments and samples (mostly backwards pizzicato violin) thrown in for good measure. I love Yann Tiersen’s work and wanted this guitar-driven tune to also have this bouncy and somewhat, noble?, sounding accompaniment.

The single is from your upcoming album, Salt. How did you decide to unveil this track as the first single?

The song is bright and energetic but also very much born of winter apartment hibernation. There’s a sense for us of acknowledging the coming of Spring, but also the beginning of a long-awaited sharing season. Salt was initially an EP and grew to be twelve songs long, so we have a lot of new music that was created and reimagined in this apartment during the pandemic that we’re poised to share. Also, musically speaking, it’s kind of an amuse-bouche for the new album. It’s deeply related lyrically and arrangement-wise but also stands alone as an experience.

You have also shared a video to accompany the single, what was the highlight of the video shoot?

Challenging ourselves to try new things. We decided to approach a wonderful choreographer and dancer Elizabeth Emond-Stevenson (TAKE UP SPACE) – who Moonfruits collaborated live with before – to set some choreography for ourselves and the dancers. The video concept was house-hippos inspired – these little vignettes with tiny people dancing, shot in such a way that it looks natural that people be there, just doing their thing. Learning the choreography was so fun. We had all these outdoor rehearsals on some uneven patio stones of a nearby apartment building. Kait was also in her first trimester and sometimes feeling a little nauseous. We laughed a lot with Elizabeth.

The other highlight was definitely working with family. We wanted to capture the dancers with an array of bubbles and so we got to rehearse and be silly with our niece, Isabelle, and nephew, Hugo, who are both in the video. Those outdoor deck rehearsals were a lot of fun and also empowering. There was sunshine and watermelon and dance challenges set by our niece, whose dance studio moniker was Stretchin’ with Gretchen. It was great to just be present in our bodies and laughing a lot. Dancers are really incredible, you know? Movement – for stage, for video, and just for ourselves – is something that both of us would like to keep working on.

When it all came together, with the dancers, their bubbles, the choreo, the improv, the green screen, the footage of our apartment, Andrew’s editing, the cameos of dear sweet cat Sully who passed a few months after shooting – we were just amazed. We hope it makes people marvel at their home space and want to get up and dance for the hell of it.

We’ve been busily working away at our new album for three plus years now, and have so much we’re itching to share. We expect to put out (at least) 6 more videos along with full album in September of this year. We’ve planned an album release show in our hometown, joined on stage with a full band at Red Bird Live, Old Ottawa South’s beautiful new performance hall. These songs have deep roots and we’re planning different ways to share the stories behind the songs with folks online. In May we’ll be taking part in the Rideau Roots canoe-camping artistic residency planned by singer-songwriter and nature-enthusiast/guide Kate Weekes. It’ll be great to be out on the water again. The first of many touring plans – with our brand-new tiny person in tow – are also in the works.