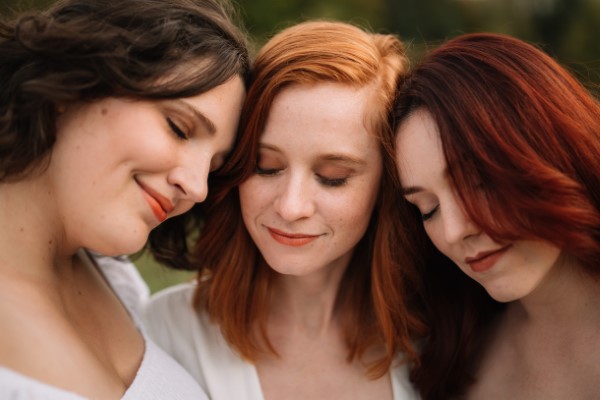 Following their highly acclaimed debut self-titled EP, emerging stars, Lunar Bloom have unveiled a new single, “Heroes”, with a video to accompany the release. “Heroes” is from their upcoming debut album, Running Deep, which is set for release this June.

“Heroes” is a theatrical piece that moves through several different sections, with no chorus, highlighting Lunar Bloom‘s tight, elegant, intricate, sibling-like harmonies. Written in reaction to the Brett Kavanaugh hearing and Christine Blasey-Ford’s testimony, it finds lines, drawn in the sand, dissolving away; peaks with a stunning vocal crescendo of the words “hold on”; and resolves with all three members yelling, “What’s belief got to  do with it?” The tension is palpable in the heightened, dissonant chord of the song’s climax.

“The song is a reaction to the limitations of the me-too movement, and the shortcomings legal systems have in protecting survivors of sexual assault,” says LunarBloom. “It examines the trauma experienced in the process of attempting to hold others accountable.”

Check out the video for “Heroes” below, and find out more about Lunar Bloom via our mini-interview.

Lunar Bloom is Brittany, Kelly & Jocelyn, three long-time friends. We like singing about our feelings and writing music that is emotional and healing. Our performances are full of storytelling, sass, joy, and all the hard parts of navigating the difficulties of life.

How did the three of you meet and form Lunar Bloom?

We met studying Musical Theatre at Sheridan College. It was there that we first heard one another’s original music, sang backup together and became fans of each other. After graduating, Brittany and Jocelyn ventured across oceans. Brittany to Australia, Jocelyn to Scotland then England. In 2017, when both had moved back to Toronto, Kelly sent out a text that read “Do you want to start a band?” Fortunately, both said yes. We started writing songs together in Kelly’s living room once a week and got our first gig opening for Amanda Rheaume. This forced our hand to come up with a band name and enough music for a set and thus, Lunar Bloom was born.

You have just released your new single, “Heroes”, what can you tell us about the writing process behind the single?

It was written in the aftermath of Christine Blasey Ford’s testimony and Brett Kavanaugh’s confirmation. The outcome left Kelly feeling frustrated and she felt a loss of hope that the beginning of the me-too movement had given her. She shared an outline of a song idea to the group and when Britt heard it she thought about a voice memo of her own that had similar themes that she thought would work well as an intro. The pieces fit together perfectly. From there the song quickly came together.

We really wanted to emphasize the emotional arc in the song which is how we ended up with such an unusual structure. We didn’t realise at the time that it was our background in theatre that informed this process.

“Heroes” was actually one of the first songs we worked on during pre-production with our producer for the album, Joshua Van Tassel. He helped us deepen the emotional journey by slowing down certain sections and changing the dynamics in others.

The track is pulled from your upcoming album, Running Deep, how did you choose this long to be your first single?

In working with Gavin Michael Booth we were really excited about the narrative concept he had for the music video, which is one reason we initially chose it as a single.

We chose Heroes as the first release because it encapsulates a lot of the musical elements and themes we explore on the rest of the album. We also love the idea that the very first thing people are hearing is our voices on their own. It’s our first single release and also the last song on the record.

In addition to Heroes, we will also be releasing two other singles with music videos, Call Me A Woman and Running Deep. The full album release will be on June 4th, 2022.

We are looking forward to getting back to live shows and have plans to tour the album throughout Ontario over the summer and fall.