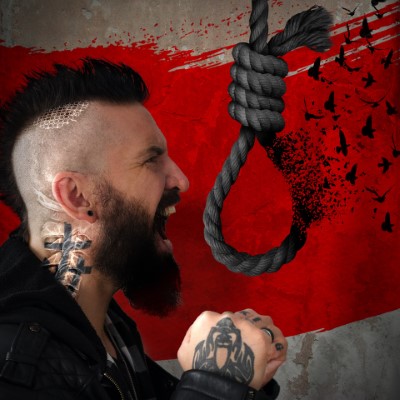 Award-winning Canadian rocker and Governor General of Canada Meritorious Service Medal recipient, Robb Nash has unveiled his new single, “Ally”, from his latest EP, Ally. This release is the latest in a string of stirring releases shining a stark spotlight on suicide and prevention.

“And the new single, ‘Ally,’ is the moment you realize that, in order to win any war, you can’t fight it alone,” he continues. “In the song, you’ll hear two people having faced the same struggles cry out and vow to be there whenever their ally feels fragile and vulnerable.”

One peek up Nash’s sleeve at the hundreds of names tattooed on his arm reveals he very much walks the talk.

“The names are from over 900 suicide notes I’ve received from kids,” Nash explains. “Some of them have my lyrics as tattoos, too; it’s a mutual relationship of ‘go forth and conquer.’”

Alongside The Robb Nash Project’s new songs, “This Is War” and “Ally,” and the album that orbits them, the skin-inked gesture is part of Nash’s long-held commitment to combat mental illness — a high-stakes conflict he personally endured.

Found with no pulse following a head-on collision, Nash was resuscitated on the side of the icy road near his home in Winnipeg, MB. His skull was rebuilt with Titanium, and his lengthy recovery sparked a severe depression.

“Frankly, I did not want to be alive,” he shares. “I was an athlete; my identity was lost, and that brought me to a very dark place for two-and-a-half years.

“Men in this society can feel like talking about our feelings or struggles is weak, so I kept it inside. One day, I picked up the guitar and started my entire journey into music to tell my story.”

While that journey included, at one point, a record deal on the table, it ultimately morphed into a motivational-meets-music tour telling his story, confronting stigmas, demonstrating purpose, and welcoming those most vulnerable to feel okay asking for help.

Now in its 11th year and counting, The Robb Nash Project has appeared before more than 500,000 people — mostly students across the country, as well as at maximum-security prisons, and keynote speeches for the Psychiatric Association of Canada. He also works closely with Kids Help Phone, the Canadian Mental Health Association, and school counselors to ensure students get the follow-up they need.

While the new album’s inspiration might have come from students coast to coast, the sound on This Is War is all Nash’s. Co-produced by Anthony Anderson and Steve Smith, the 13-track heavy rock release reveals the familiar full-throated rallying cry of anger, hope, and concern previously displayed across EPs Tell Me Why (2019), Live On Arrival (2020), and more. This is War marks the first release under Nash’s new partnership with Warner Music Canada.

“It all has the same goal: save lives,” Nash says of both his public health leadership and music — including This Is War. “I’ve realized you can have all the resources available, but if people aren’t ready to reach out for help, it’s no use.

“In that, I was trying to figure out what my role was,” he shares of both the album, and his ongoing ethos that’s earned him a rightful spot in Peter Mansbridge’s book, Extraordinary Canadians, as well the Meritorious Service Medal from the Governor General of Canada.

“I’m not a counselor. I’m not a psychologist. I’m here to get the conversation started, and to let people know it’s okay to reach out for help.”

Stay up to date with Robb Nash via his socials.