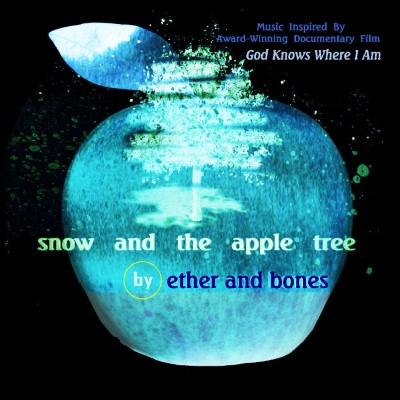 Here is a rather poignant concept release from BC artist ether and bones. Snow and the Apple Tree is somewhat stripped down in style, but charmingly so, its softspoken vocals and folk cadences constructed in a way that accentuates the spirit of the story being told. And that story is truly heartbreaking. Based on the real-life experience of Linda Bishop and subsequent documentary God Knows Where I Am, it is a touching and tragic tale of dwindling physical and mental health in the context of homelessness, in this case, re-adapted to be set to music.

Though the release is short, it sure is impactful. Only a few songs are fully realized in length and lyrical content, the highlights of those being the titular track for its initial presentation of the theme and sound, and “Hiding Away (Linda waits for Steve)” for its well-emoted vocals at a crucial point within the timeline and musical progression. Other tracks are tone-setting instrumentals like the orchestral-feeling “Running Out of Apples,” as well as interspersed, spoken journal entries written by the focal character that strikingly weave and advance the overall narrative.

As a whole, Snow and the Apple Tree is terribly sad but powerful, and a thoughtful tribute to a woman whose end is but a variation of those encountered by many members of a marginalized population too regularly discounted and forgotten. It is a reminder that those who struggle most simply to survive are less fortunate versions of anyone, each with their own unique set of lived events characterized by complex thoughts, deep sensations, and individual trials that some are sadly given little opportunity to overcome. At the very least, they might be remembered with compassion, and ether and bones does well to do this by acknowledging and celebrating beautiful souls like Linda Bishop.