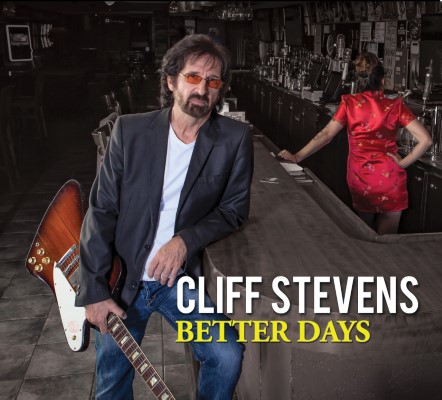 Montreal, QC-based blues-rock guitarist, Cliff Stevens is set to release his new album, Better Days on June 10, 2022, which is his fifth solo release, featuring eleven new original songs in an array of styles from driving blues-rock, slow classic blues to acoustic country blues. With his latest release, Cliff promises that Better Days are still ahead.

In advance of the release, Cliff has unveiled a video for the title track, “Better Days”.

Watch the video below, and find out more about Cliff via our mini-interview.

You have just unveiled a video for your new single, “Better Days”, what was the highlight of the video shoot?

The video features different people holding signs that say Better Days in their native or ancestral language. There is representation in English, French, German, Ukrainian, Thai, even Mohawk and others. For me, this was definitely the highlight of the video. Everyone around the world was affected in some way in the last two years and I think we can all relate to the theme of looking forward to better days ahead.

The track is pulled from your upcoming fifth solo album, Better Days, what can you tell us about the writing process behind the album?

This is a very personal album for me in that it reflects the changes I went through in the last two years. I had to get a day job four months into the pandemic because of a lack of gigs and touring. It was actually a good experience because it kept me grounded and able to concentrate more fully on writing new material as opposed to being on the road and having a full schedule gigging playing music from my other albums. It also financed the new album. I like to walk and actually did most of the writing in my head during these walks. I had some ideas floating around, and developed them over the course of about 6 months. I really enjoy the process of taking a single idea, working on it, and rewriting constantly until a finished song emerges that can touch people in different ways. I also found that that freed me from the constraints of my instrument. When I pick up a guitar my fingers naturally start to play progressions and licks that I’ve been playing for years, and composing without the guitar allows me to come up with different ideas.

Now that live music is back, do you have any upcoming shows or festivals throughout Canada?

Yes, live music is back finally! I am currently touring Europe to promote the new album and returning in June for the official release of the album on June 10. As of now, there are no Canadian live festival dates or shows for 2022 on my schedule. I am actually thinking of going back to the day job for four months or so and starting writing songs for a new album in 2023.

2022 will see a couple of new videos from the new album, virtual concerts, and probably some live shows as well.