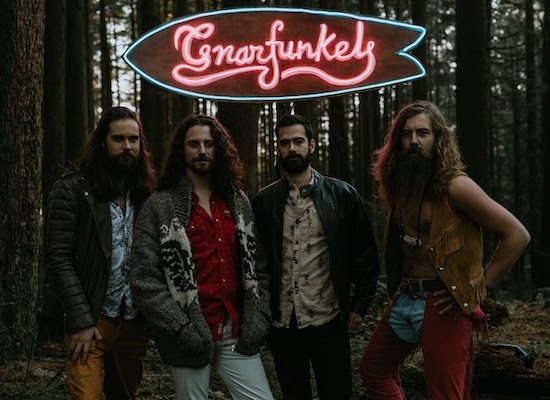 West Coast funk-rock band Gnarfunkel are celebrating 4/20 with the release of their new single, “Bamboo Bong”, with a video to accompany the release.

“Bamboo Bong” is the latest track to be released from Gnarfunkel’s debut album Gnarnia, which is out on May 6th. The perfect song for coming out of the pandemic, “Bamboo Bong” celebrates those times that we need to escape from the turmoil around us.

“Living in the modern world can be overwhelming,” says vocalist/guitarist Tyler Lanigan. “Luckily for us, a new form of escapism has recently been legalized in Canada. Through its chaotic intro, funky verses and bridge combining anxious instrumentals with clips of Reefer Madness, ‘Bamboo Bong’ explores the dichotomy of being high combined with the residual stigma for the soul-destroying reefer.”

Gnarfunkel’s debut album Gnarnia was conceived and recorded as a lockdown project when it became clear in early 2020 that they would not be playing live shows for a while.

“We looked inwards and decided to assemble the debut record we had always dreamed of making,” says Tyler. “It was a vinyl album from the very beginning, with each side and track listing planned long before any recording began. All the songs on the album had been sufficiently road tested to audiences across the beautiful province of British Columbia and went through an intense rewriting process that lasted a year.”