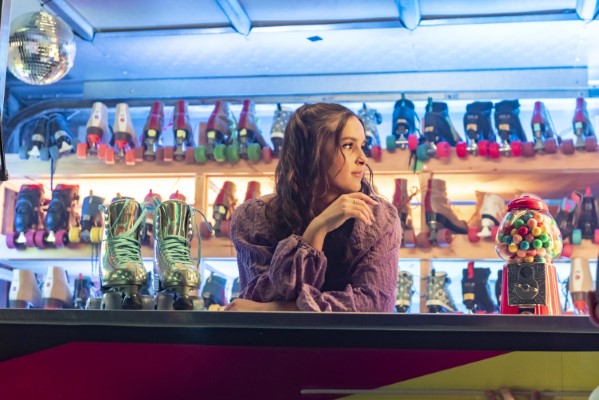 “Kinda Into You” chronicles the blissful, magnetic, and almost naive early days of a crush.

As for the music video for the new release, it’s a dreamy and playful roller skating retro extravaganza, written by and co-directed by Victoria with long-time video collaborator, Brock Newman.

“I learned how to roller skate a week and a half before shooting” says Victoria. “I’ve come up with some crazy ideas for my previous music videos, but this one included the extra challenge of learning a new skill.”

Check out the video for “Kinda Into You” below, and find out more about Victory via our mini-interview.

Hi, thank you so much for having me back! Lots of things have happened, but I think the most significant thing was going on my first tour. It was such a fun, memorable, fulfilling experience. I opened up for Devon Baldwin on an 8-city tour across the west coast of the U.S. including Seattle, San Diego, and LA.

You have just released your new single “Kinda Into You”. What can you tell us about the track?

I wrote “Kinda Into You” about that infatuation you feel with someone when you first meet them and everything just clicks. The song is about a blissful, innocent, “not quite love” feeling I had for someone. I wrote “Kinda Into You” with Mathew V, a fellow Canadian artist who I’m a huge fan of, and my amazing producer Ryan Worsley. Working together was so much fun, and we wanted the song to feel retro but fresh and pop!

You have been writing and co-directing your music videos for a few years now. That’s a very impressive accomplishment for someone who is 16 years old!  What is the most important thing you have learned about video production so far?

When I first started making music videos I worked with so many talented people in the film industry and I made sure to soak up every piece of knowledge I could while I was on set. Even early on I had very specific ideas about how I wanted the videos to reflect my music, so I always shared my thoughts and ideas about those videos with the director and I sat in on every pre-production meeting. Eventually, I decided I was ready to write and co-direct so I started putting together storyboards and writing out detailed concepts. There are so many moving parts to video production – from writing treatments, to putting together call sheets, planning a day, and so much more. But I think the most important thing I have learned is how to take an idea or concept and have it translate on screen. I feel very privileged to have learned from the best!

The video for “Kinda Into You” is really spectacular! How did the idea for the video come about? Any cool behind-the-scenes stories you can share with us?

For the “Kinda Into You” video, I wanted something retro, mesmerizing, and fun. My friend Owen brought up the idea of a roller skating rink and I knew right away that that was perfect. Something new, but vintage, and dreamy, but engaging. I learned to roller skate just a week and a half before we filmed the video which was such a lovely experience thanks to the people at RollaSkateClub where we filmed and I got lessons.

You are heading out soon on another US tour supporting Hey Violet. What didn’t you pack on the last tour that you will be taking along this time and why?

This time I’m gonna be packing my chemistry books! Last time, I had math, English, and physics to work on…this time economics, social studies, and chemistry. I still go to regular high school full time so I am going to have to do tons of work while I’m on the road and catch up when I’m back.

Can we expect to see any Canadian tour dates this year?

Yes!! There will be a Vancouver show, as well as some shows in Toronto later this summer.

Hopefully, there will be a full Canadian tour this year.