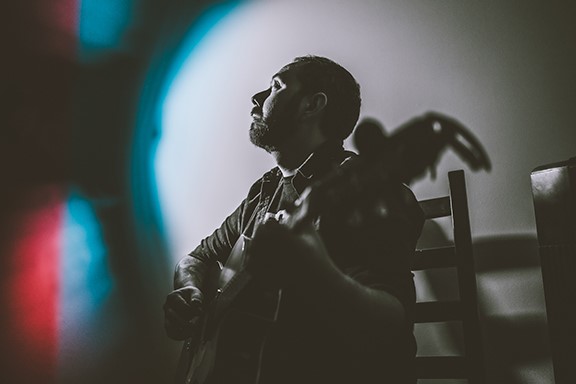 Even though the choices we make and the paths we walk are unique to each of us, we all share the fact that change is unavoidable and can happen when we least expect it. For Blaeser — Taylor (T.J.) Lang — the global pandemic that changed everything for all of us two years ago is also what launched the creation of “Potential Paths.”

“On March 10, 2020, I was prepping to play a half-time St Paddy’s Saddledome show with my former band, Celtic rock group Crack the Lens, to 13,000 people, and had just put down a deposit on a Toronto apartment,” Blaeser remembers. “Two days later, all of that was gone as the world closed down. It really got me thinking of how quickly things change, all the paths we never get to walk, all the people we never meet — or leave behind, for that matter — as circumstances change our paths through life.”

Those old “iterations” of ourselves are often left behind at a crossroads or a fork in the road we may not have seen coming.

“‘Potential Paths’ directly references big events in my life where everything suddenly changed course,” notes Blaeser. “All those younger, more innocent versions of me had to disappear along the way to who I am now, just as my current self will disappear to continue that journey.”

Being open-minded and open-hearted to those course corrections is one of the takeaways from this thoughtful, melodically-memorable rock song which is also the lead single from Blaeser’s forthcoming and second full-length album, An Audio Guide to Introspection, which is set for release this Summer.

“10 songs of darkness and light, and the paths I did and didn’t take,” is Blaeser’s top line for the new collection recorded, mixed, and mastered by Casey Lewis at Calgary’s Echo Base Studio last October through December.

“The title came from a Twitter conversation with Dan Mangan where I said that his More or Less album was like ‘an audio guide to introspection’,” recalls Blaeser. Mangan is a big influence on Blaeser’s songwriting, in addition to other erudite and reflective Canadian songwriters like Dallas Green and Gord Downie.

“My music, currently, is equal parts Tragically Hip, fingerstyle guitar virtuoso Jon Gomm, and City & Colour,” he says, adding, “If all I’ve got is one guitar, I want to get as much out of it as I can in terms of fingerstyle techniques, and if all I have is one voice, I want to make every word meaningful and memorable.”

Check out “Potential Paths” below, and stay up to date with Blaeser via his socials.