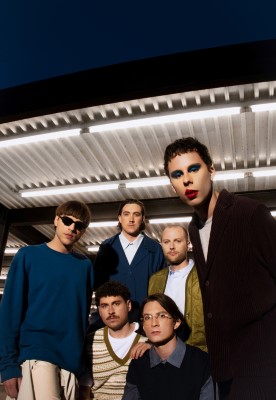 The funky rhythm of the song traces the path for a dog and a little floating soul, the heroes of the story. In a retro-futuristic setting – reminiscent of Planet of the Apes, Gulliver’s Travels, or Ivan Tsarevich and the Grey Wolf – the duo’s mission is to free a group of trapped spirits.

Directed by Léa Dumoulin, the video looks like an adventure without bad guys or good guys: “Hurlevent and Gabriel Favreau have beautifully put this quest in image. The song “Château de fantômes” is the soft part of the album. In this track, it’s the ghosts who know the way out of the situation, they’re not hostile.”

That extraordinary Ghost Castle seen in the video is actually inspired by an actual abandoned structure somewhere between Lithuania and Poland.

Watch the video for “Château de fantômes” below, and find out more about Choses Sauvages via our Five Questions With segment.

We are a French Canadian band from Montreal. We are music lovers who like to spend whole days in the studio geeking about the resonance of some obscure synth, drum tones, and MIDI configurations. But we also love to perform live and make a crowd go crazy. We might have a nu-disco flavor in our sound but in a venue, we are more like a punk band.

The last album is really a mix of various genres. We have influences going from kosmische musik to techno and more. We really treated ourselves with a big studio trip. After spending some time in the studio doing the basics (drum, bass, and guitars), we had two weeks in a big 70s mansion where we brought an army of synths (and I don’t exaggerate). We had a lot of fun doing all those arrangements. I think that from the first glimpse the album sounds like some kind of energetic space disco with a new wave touch but there are also a lot of subtleties going on all the time. It’s an LP for the dance floor and for the music geeks also.

Like a lot of musicians, we had a bunch of live sessions filmed during the pandemic. The production teams really put a lot of creativity into that and I think the level of live sessions stepped up enormously. It was a way to perform for people but we definitely missed seeing a real crowd dancing in front of us. At least, it gave us a lot of time to focus on the composition of the album.

We really love Colin Stetson. He has worked with many different artists and his solo works are really impressive. His style is really defined but he can also really blend in a lot of different styles. I would be really curious to hear him blow his sax with us, that could be really interesting.

After the long break(s) we had, we really crave playing live. We will definitely focus on touring to show the live version of Choses Sauvages II – several dates are already announced in Quebec – you can check out our website for details: https://chosessauvages.com/. We want to spend some time playing in France too. We were in Paris recently and there was a really good reception for our music there. Of course, we’ll continue to compose songs and explore new sounds because that’s what we do!