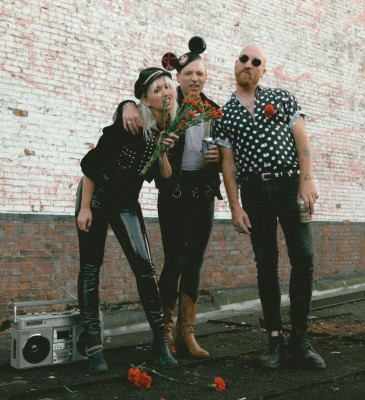 Vancouver, BC-based alt-rock band, Little Destroyer have unveiled their new single, “Hitman”, via Tiny Kingdom, with a video to accompany the release.

Produced by Howard Redekopp, “Hitman” is an off-beat commentary that touches upon the harassment women encounter in today’s society. The video is directed by the talented Connor McGuire, who directed the band’s previous three videos.

Little Destroyer’s fierce frontwoman Allie Sheldan plunges through an addictive melody while cooly rolling off each lyric with nonchalant vocals. “Hitman” transports listeners to a sonic landscape reminiscent of the volatile 00s pop-punk energy of The Kills and Yeah Yeah Yeahs whilst placing them alongside modern contemporaries such as Dream Wife and Amyl And The Sniffers.

Says Allie about the making of the video,

“It was a no-brainer to do this video with Connor McGuire, not only because he is amazing and did our previous three videos, but we grew up together and were (very predictably) obsessed with Quentin Tarantino as teens – which felt a fitting starting point for ‘Hitman’. Connor created a video that is balanced perfectly between mundane reality and something far more cinematic. Definitely something you’ll want to watch over and over. It still makes me smile.”

With its drilling guitar riffs and pummeling bassline, “Hitman” underscores the group’s signature brooding, punk style. A powerful explosion of pent-up fury and suppressed emotional tension, the single validates feelings of rage attached to the daily experience of being alive.

“Michael and Chris told me to write a story, so I wrote ‘Hitman’. For weeks, I had that recurring question in my head ‘does everybody want to hire one’? We had talked about making something that was simple, driving and to the point, like a Sleaford Mods song. Kind of funny and satirical but also really kind of not, because shit, sometimes life tries to kill you. We’ve all felt sadness turn into rage, maybe while sitting on the curb outside the local liquor store. What do you do with a breaking point? I guess in our case, you write a song.”

Check out the video for “Hitman” below, and stay up to date with Little Destroyer via their socials.