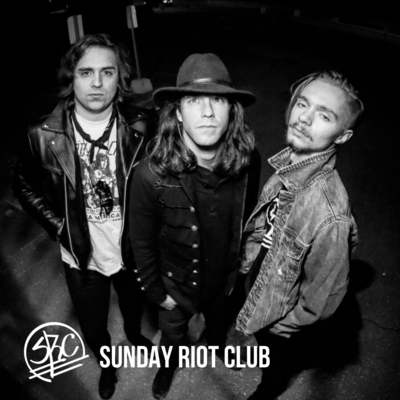 Ottawa, ON-based powerhouse trio, Sunday Riot Club is made up of Alexandre Maheux, Jean-Phillippe Therrien, and Gethyn Hatch. The three have unveiled their new single, “Lost In Paradise”, along with a video to accompany the release. The single was recorded at Artist Alliance Company and is an acoustic track, which is different than what fans are used to hearing from the band.

“This release was long-overdue, as they say. We are very proud of the final result and it was a real pleasure to work with Artist Alliance Company. The recording process was really easy. “Lost In Paradise” is a different song than what we normally do, so it was an interesting experience.”

Check out the video for “Lost In Paradise” below, and find out more about Sunday Riot Club via our mini-interview.

We’re Sunday Riot Club, a hard-rock power trio from Ottawa. Our sound is a mix of a lot of eighties influences such as Guns N’Roses, The Cult, Metallica, Aerosmith, and Billy Idol.

We would describe ourselves as a live band, mostly. SRC was founded in 2017 and made close to 100 appearances throughout Ontario and Quebec. Every time you will see us live, we will give everything we’ve got. That’s what SRC is all about.

Now that the pandemic seems to be slowing down a little bit, we want to make 2022 the year of Sunday Riot Club. We’re currently in talks with different possible partners and promoters. We’re having a lot of fun at the moment, and people seem to be enjoying what we do and our live shows that are all about the energy, you know. We can’t wait to see what the future has in store for us.

You have unveiled your new single, “Lost In Paradise”, what can you tell us about the writing process behind the track?

This song was written during one of the many COVID-19 lockdowns, so we used an unusual process. JP (guitar) sent the rest of the band an MP3 demo of an awesome guitar solo and its rhythm part for a song that wasn’t existing yet. Just… a quick idea, like that. But the riff really caught our attention.

Alex (bass, acoustic guitar, vocals) then decided to make a lead riff out of the rhythm part and off we went. The music came before the lyrics which is also unusual for Sunday Riot Club. We normally have the lyrics down before the music. That way, we know what the main melody will be, which is the hook of the song, you know. This time, the ‘’catchphrase’’ came to Alex at the very end of the process.

You’ve also released a video to accompany the release, what was the highlight of the video shoot?

Just to shoot in a cozy environment that is the Artist Alliance Company studio would be the highlight of the shoot. The layout was perfect to match the song’s vibe: cozy, restful, welcoming.

We always have a good time shooting videos. That was our fourth one. We did videos for ‘’Light This City’’, ‘’Leaving California’’, and ‘’Where The Wild Things Are’’. Sheldon Hatch from SHM+D Live shot all of our videos and he is also a big fan of all the same music that we listen to. So it was an easy process. He totally understands what we are looking for and we always have a good time. We can’t thank Sheldon enough.

You recorded at Artist Alliance Company, how was that experience?

It was a lot of fun, even though the process was long enough, because of the different lockdowns. It’s always fun to hang out with Jason Wilkinson (studio owner) who is a big music nerd just like us. We listen to the same bands (Motley Crue, Skid Row, The Cult, Alice Cooper, Kiss) so it’s always fun to talk about the many reunion tours going on and the many rumours we heard.

Plus, it was easy for him to gauge what sound and what type of production we were looking for.

Like we said earlier, we want to make 2022 the year of Sunday Riot Club. We will continue to promote our new single ‘’Lost In Paradise’’ for the next couple of months. We have interviews coming up about this song.

Then, we will release two new singles. They are titled ‘’Risky Business’’ and ‘’Gone In Sixty Seconds’’. They really are bangers. Big production with that big 80s snare sound, you know. Lots of guitars too. We will launch a video for each of these singles, plus a ‘’Behind the video’’ footage. Then, in June, we are already scheduled to go back in the studio to record two more singles.

Then we will hit the road. We have shows booked in Ottawa, Montreal, Kingston, Verdun. It will be a fun year. We can’t wait to share more music with you guys! We invite you to follow us on Facebook and Instagram for more details and more show dates.