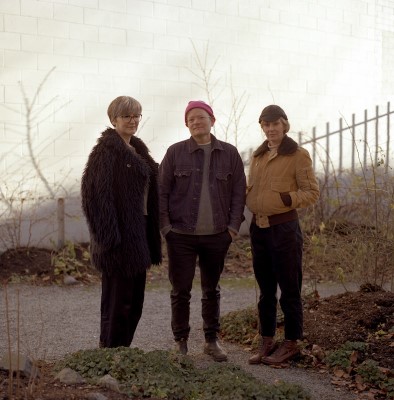 Vancouver, BC-based indie-rockers, Frog Eyes is made up of  Carey Mercer (vocals, guitar), Melanie Campbell (drums), and Shyla Seller (synthesizer, electric piano). The trio has unveiled their new single, “Rainbow Stew”, with a lyric video to accompany the release. The single is pulled from the band’s new album – the first in four years, The Bees, which is set for release on April 29, 022, via Paper Bag Records.

“’Rainbow Stew’ doesn’t unpack as cleanly, in terms of a personal narrative, as the two other songs we’ve released for The Bees, but it is representative of one of the five kinds of songs that I can write — usually this type comes at the end of the writing process, when I have a sense of the shape and weight of the record. These songs come really fast — I think I wrote this song in 5 minutes — and they serve a contrasting purpose. I remember in (the 3 months that I attended) painting school, learning about Cezanne’s White Pipe, how it livens the paintings, and also intensifies the gloom in the corners. ‘Rainbow Stew’ lightens the whole affair, and allows the dense haze of other songs their own beauty. These songs are the ones I personally cherish the most.”

From the very first guitar riffs on The Bees’ opening track, “Rainbow Stew,” one can sense this latest album is an exploration of the past, a synthesis of what came before, a celebration of having developed a singular sound within the confines of rock music.

“At some point, I started thinking a lot (too much?) about a very specific kind of pressure put on record producers, music makers, to constantly innovate or reinvent ourselves,” says Carey Mercer.

And so, after thinking through the idea that “novelists and painters are allowed to have eras, periods, bodies of work that find a small bit of psychic space and then, over years and decades, testify to the ecology of that space,” Mercer began to write.

“So I wrote songs that take in the view of my past, or explore the little stake I have made over the past twenty years of work: I thought of my past as my future, and it felt a bit radical,” he says.