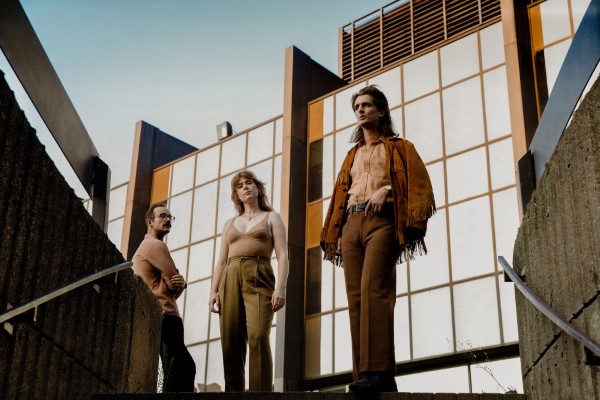 Hamilton, ON-based trio, Ellevator have unveiled their new single, “Party Trick” from their upcoming debut album, The Words You Spoke Still Move Me, which was produced by Chris Walla, and set for release on May 6, 2022, via Arts & Crafts. You can pre-order the album HERE.

Speaking about the new single, Nabi of the band says:

“A friend said to me that being in a band means never growing up. It’s easy to feel like Peter Pan on tour, all the trappings of adulthood a hundred truck stops and a thousand miles in the rearview. I started writing this song to my teenage self: a flighty, insecure kid posturing confidence. I’d jump around to all the different cliques like a self-styled Ferris Bueller, leaving just before friendships could settle in. Being on the road brought out those same old tendencies: keep it all on the level, don’t go too deep. Driving down the highway, floating through the hall/Everything is different, nothing’s changed at all.”

The band, who have just wrapped up a run of US dates including a stint at SXSW will support the release of the new record with Canadian dates this May with support coming from Pleasure Craft (Toronto) and Deanna Petcoff (London, Hamilton).

Watch the lyric video for “Party Trick” below, and stay up to date with Ellevator via their socials.