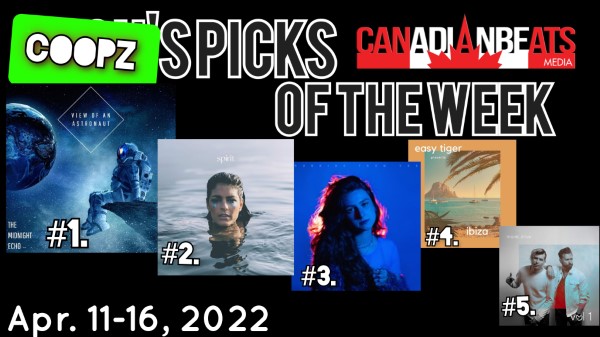 Well, would you look at this, looks like somebody left me in control this time. How’s it going out there music fans, it’s your replacement and favoritest host Coopz! Zach’s unavailable, so I thought I would take over and give you my recommendations from that website he’s talking about all the time. Yep, I have chosen five of my favourite songs to listen to this week and the artist that made them from Canadian Beats. That’s right people of the internet, you’re watching “Coopz Picks Of The Week” on Canadian Beats! Be sure to visit all of the articles that I’ve chosen this week through the links down below. However, I have also got some clips to show you in the episode posted right below here, just a little taste of your new favourites. I hope you enjoy them as much as I did, oh and I’m sure Zach would enjoy them too so check them out! Champion

5. First off here on this special list is Toronto-based pop-rock band, Manic Drive. The sibling Duo recently had their album Vol. 1 nominated for Contemporary Christian/ Gospel Album Of The Year at this year’s Juno Awards. This will mark their third consecutive album to be honoured at the prestigious music awards ceremony. I’ve personally heard their name over the years, especially growing up a church kid but I never got the chance to see them perform. Be sure to check out their Juno nominated album Vol. 1 on any of your favourite streaming platforms now. However, if you’d like to learn more about Manic Drive, be sure to head over to this Five Questions With segment we had with them HERE.

4. Coming up next is going to be the new band on the scene called Easy Tiger. They are made up of Gabrielle La Rue and Sarah Dion who were originally part of separate bands but came together after discovering their love of writing music together. They have unveiled their new single “Ibiza” which will be coming off their debut six-song EP Breakfast In Bed. That EP will be coming out on May 6th so keep an eye out on all streaming sites. However, with this upcoming EP, It sounds like Gabriella wanted to tell the story of her last year. Going through a rough breakup, moving into a new apartment with her dog and all interspersed with road trips – like the evolution of her state of mind, almost scene by scene. Please head over to the Five Questions With segment we had with the new duo, and check out their latest single “Ibiza” HERE.

2. The runner-up for the top spot this week is going to be the Vancouver alt-rock duo Dear Rouge. They finally shared their long-awaited third studio album Spirit, via Pheromone Records. It is available on all streaming sites so be sure to go and check it out for yourself. The band recorded this record completely secluded away from busy cityscapes. Drew and Danielle had decided to take up residence in a lakeside cabin shortly after the release of their last record, PHASES. They found themselves spending their days alone together, and Spirit began to take form over the winter months. Please head over to the website to learn more about the brand new album, Spirit HERE.

1. Taking the final spot in my special choices this week called “Coopz’s Picks Of The Week”. Its Vancouver alt-rockers The Midnight Echo, who’s unveiled their latest single, “View of an Astronaut” to all streaming platforms and released a new video along with it. They decided to record and work with their former producer, Terry Benn. Well, the video’s concept slogan was, “think Austin Powers, but on a budget.” The latest single features a struggling company being sent to Mars in the hopes of creating buzz — but without the financial backing, the company is forced to fake their way to outer space. That sounds oddly familiar to the original, but be sure to head over to the website and check out the new video HERE.

I don’t know what Zach was worried about, that wasn’t a dumpster fire of recommendations, was it? Exactly!! If you enjoyed these choices this week, make sure to tell the powers-that-be to keep me around. Don’t forget to head over to the homepage on Canadian Beats, and find some more awesome music. I hope to see you all next week, ready for some new music. Because you know I’m going to be here with a steaming hot plate full of it! So as always, PEACE, LOVE AND GOOD MUSIC!!