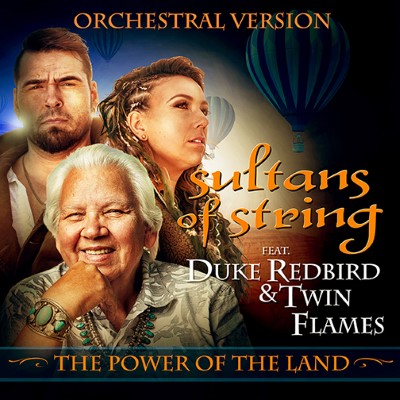 The orchestral version of the song is the latest to land from the multi-award-winning and JUNO-nominated group’s most recent album, 2021’s Sanctuary — an 11-track offering featuring a broad range of incredible talents from the USA/Canada, many of whom arrived as recent immigrants and refugees, and essential Indigenous voices.

The potent and poetic single soars with interwoven vocals of Indigenous spoken-word artist Duke Redbird and married Ottawa folk duo Twin Flames. The poem is by Duke, who is an Ojibwe Elder from the Saugeen First Nation in Southwestern Ontario, and is performed by Sultans of String with Duke and Twin Flames — comprised of Chelsey June, Métis (Algonquin Cree heritage) from Ottawa, and Jaaji, Inuk and Mohawk from Nunavik and Kahnawake.

“I heard Duke recite that poem years ago,” Sultans of String frontman Chris McKhool says. “I was so moved that I introduced myself to him after the performance and said, ‘Have you ever thought about putting this to music?’”

Fast-forward three years — to the day — when McKhool realized he had finally written the right backdrop for Redbird’s stirring words.

“It was just one of those beautiful moments where I realized those lyrics might work perfectly.”

Redbird explains the genesis of the original poem:

“It’s essential that we understand that nature is our survival and survival is nature. Money and power have interrupted the power of the land and, until we understand that nature is the real economy and the economy is nature, and that’s the only way we’re going to survive, is if we take care of our mother, the earth. And money and power, it doesn’t really have a place in the healing associated with what needs to be done as the climate changes and the earth retrieves her sacredness and plants it in our minds and our bodies.”

Like most of the collaborations on Sanctuary, “The Power of the Land” came to life in the studio with Sultans of String and their guests composing and creating together. But no matter how they began, they all ended the same: with all the artists recording together at Jukasa, a world-class recording facility on the Six Nations reserve between Toronto and Buffalo.

“We knew we had to do it this way,” McKhool stresses. “We couldn’t make an album of deep collaborations and do it long-distance. Having everyone in the room at the same time made it extremely challenging, both from a logistical and technical standpoint, but the results certainly made it worthwhile.”

This single is co-produced by the multiple award-winning team of bandleader Chris McKhool and 2021/2022 JUNO nominated engineer John “Beetle” Bailey. The beds were recorded on First Nations land at the Indigenous-owned Jukasa Studios. Founded by Ohsweken’s Kenneth Hill & Jerry Montour, Jukasa Studios is a multi-million dollar studio created for world-class and developing artists to make music in surroundings rich in spirit and tradition. The legendary 8072 G Series Vintage Analog Console which spent 12 years of its life in studio 3 at Abbey Road Studios in London England, was purchased and moved to Jukasa Studios in 2009.  Overdubs and mixing were done at The Drive Shed with John “Beetle” Bailey and mastering by Harry Hess at HBomb Mastering.

Check out the single below, and find out more about Sultans of String via their socials.