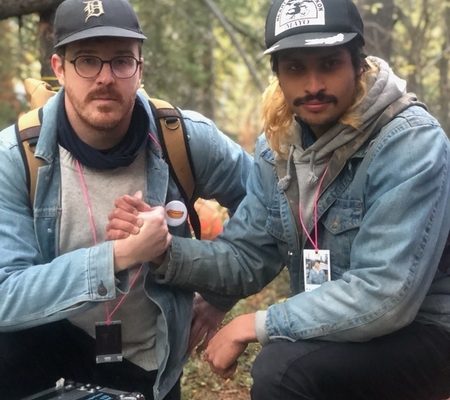 The duo is composed of lyricist/bike polo ripper Ashwin ‘Big Ol’ Man’ Freyne and synth wiz/kitchen junkie Nic ‘Boss Chef’ Hyatt. Their music is a little hip-hop, a little R&B, a little indie, a little BIPOC, lots weird, and a lot of fun.

The music leans heavily on vocals that are steeped in local & pop culture references. The lyrics are set to synth and TR-808 drum machine beats infused with other instruments we cart around like a bass clarinet and the accordion.

Check out Vertebrate Land Invasion below, and find out more about CLout gAMe via our Five Questions With segment.

We are CLout gaME. A lot of people aren’t sure about why some letters are capitalized and others aren’t. Well, it’s a common case of including the word CLAM within our band name – a subtle nod to a storied bivalve. We, the members of CLout gAMe are Nic and Ashwin – Nic is a musician and a record label manager and Ashwin is a math teacher & musician. We also get help from our friends Jake and Beth on some of the tracks. We live in Whitehorse, Yukon, which explains some of our most famous lines about Zillman’s Grill – sumptuous local cuisine!

Vertebrate Land Invasion came out this month (March 2022), succeeding the original vertebrae land invasion by some 390 million years – one of the longest waits for a sequel of all time. The album is a collection of songs we wrote at Nic’s house specifically for a DIY music event in Whitehorse called Greasefest. If you’ve listened to the album you know it’s unpredictable – the references sometimes feel as though they were written as Madlibs and the other songs, as much as they can, defy traditional genres.

A good show person always leaves the audience wanting more. This doesn’t strictly work if the audience doesn’t know about you to begin with though. We were lucky enough to play during a break in restrictions and build some clout, so to speak. By refusing to play again for the next 6 months we attempted to build a pressure cooker of excitement for our next show, which actually happened at the 98 Hotel this month. This sort of guerrilla marketing campaign is essential for raising one’s profile, plus it’s easier because you don’t have to play as many shows.

We would definitely choose to play with a Canadian artist that was alive. Playing with an artist that was dead would take away a lot of the fun as they wouldn’t be able to perform with us at all. From the pool of living artists we would choose Nardwuar and the Evaporators because one of our songs is definitely inspired by “Addicted to Cheese”. I know the question only says one, but it would be fun to play a bathroom show with B.A. Johnson in Hamilton as well.

I think we want to play at least one show. It can be hard in the summers in the Yukon to lock things down because people are so busy in the eternal sunlight, so you have to time things right. Being able to play with another band we are excited about would also be cool. Perhaps the Nard will read this interview and reach out. We would also like to make some music with other local artists – we love those old-school split tapes, so dropping one of those with a band from Yellowknife could be cool.