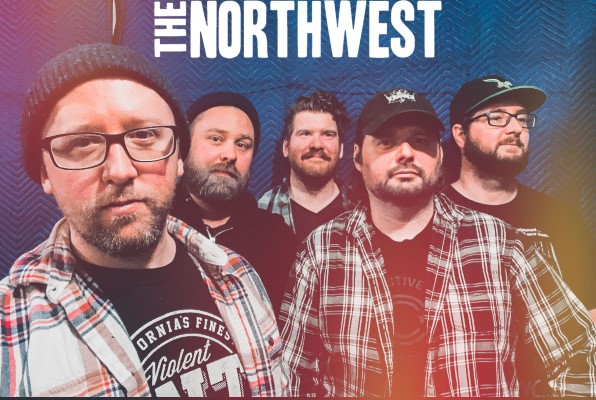 Northern Ontario-based 3-guitar Heartland Rock band, The Northwest is made up of Wayne Watkins, Greg Callaghan, Mike Yakasovich, Mike Smykacz, and Marc Santos. The band specialized in writing riffy, anthemic songs about everyday life, heartaches, and keeping it together during a global pandemic.

They have unveiled their new single, a post-lockdown summer anthem, “Long Hair (Longer Nights)” from their upcoming EP, set for release on June 10, 2022, entitled ALL IN. The single was composed by Wayne Watkins and Mike Yakasovich, produced by Dustin Goodall and Bill Priddle at Unsalted Audio, mixed and engineered by Dustin Goodall at Unsalted Audio, and mastered by Bryan Lowe at Joao Carvalho Mastering.

“The single is for all those people spending the last two years aching to watch real-life rock and roll from the bar floors and stadium seats again. Life under lockdown led to a lot of daydreaming on our part about great concerts we’ve watched and/or played, the wild nights on the town we were able to have, and how hard we’re going to party once we’re able to get back out there. It’s our statement why music is important and how the love for live music never fades, as well as a tribute to the people in the crowd that are the reason we do what we do!”

Listen to “Long Hair (Longer Nights)” below, and find out more about The Northwest via our mini-interview.

Hey! My name is Wayne Watkins, I play guitar and sing in the Northwest

Mike: My name is Mike but everyone calls me Yak, I am a guitarist for The Northwest

Greg: I’m Greg Callaghan, I play calliope and the hurdy-gurdy… Nah I also play guitar and sing in The Northwest

You have unveiled your new single, “Long Hair (Longer Nights)”, what can you tell us about the writing process behind the single?

Wayne: Well….. as we started writing this EP ( late 2019/early 2020) 2020 happened and we went into lockdown. So it really changed the writing style for us. It was a lot of voice memos haha. We had some phone recordings from 2019 of unfinished song ideas. Mike had this riff and I couldn’t get it out of my head. So in March 2020, I decided I am going to turn a negative into a positive and utilize the downtime to focus on this song. When I started writing it the idea was – soon this will pass and we will party again, haha,  just looking forward to that day. Also, come March in Northern Ontario you start daydreaming of summer and being outside all the fun things that come with summer. I would write daily and record it, send it over to Mike, listen back to the recording that evening (taking the dog for a walk)

Mike: I had originally come up with the intro riff and prechorus part and imagined it would be a lot more mellow, it almost had a bluegrassy-banjo type feel to it, I sent it to Wayne and he came up with the verse and chorus that were definitely a rock song. The breakdown in the bridge was Bill Priddle’s idea, he wanted it to have the song unravel for a bit after the guitar solos, which I suppose brings back some of that mellowness but not at the expense of any energy.

The single is from your upcoming EP, which is set for release on June 10, how did you choose “Long Hair (Longer Nights)” as the first single release?

Wayne: For me it just made sense as I feel like we have been on standby for like 2 years. The environment and timing also felt right.

Mike: It is the song to release coming out of several lockdowns, everyone is just pent up to cut loose at a concert again.

Greg: It’s probably the most energetic and upbeat of the tracks we recorded for this EP, so just in terms of the vibe and the lyrical content it seemed like this is the best track to represent the band at this stage in our career.

You are calling the single a Post-Lockdown Summer Anthem, what about the song made you refer to it this way?

Wayne: Hopefully we didn’t jinx this by saying that haha (also everyone in the band believes in being safe and keeping people safe) not having a normal summer in 2 years and missing having something to look forward to… Long Hair is about bringing people together to celebrate. It could also be a post-winter summer anthem too!

Greg: The lyrics kind of do this George Harrison “Here Comes The Sun” thing where it references the transition from winter to spring as a metaphor for leaving hard times for better days, and I think that resonates with a lot of people these days. March 2020 until now has kind of felt like the longest winter of our lives and now that restrictions are being lifted it feels like the sun’s finally peaking out from behind the clouds. Plus musically it’s just anthemic! You got Yak’s killer riffs, massive drums, dueling guitar solos, this is a track made for partying and getting a little nuts!

Now that live shows are happening again, can we expect any upcoming shows from you?

Wayne: We are planning an EP release show for June 10th we will be announcing some other shows soon!