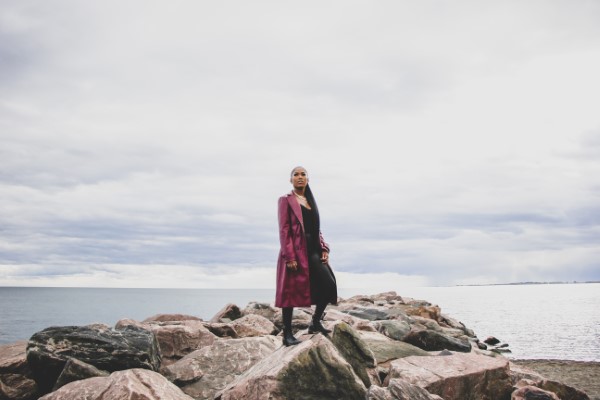 Toronto, ON-based R&B singer-songwriter Rachelle Show has recently unveiled her debut single, “Best Is Yet To Come”. The track explains the overcomer mindset she gained to escape the emotional and physically abusive environment at home. This is the first release from her upcoming EP, set to release in December 2022.

Rachelle shares on the track,

“Music is my survival tool, and that’s what makes it so solid for me. My fervent hope is that my music will guide the next young girl or hopeful woman to the right path, regardless of their circumstances. In our society, it is often believed that women who are left to fend on their own, end up selling their bodies, getting into abusive and toxic relationships, or in general need someone else to support them. Hardly anyone believes a woman can make it through her own effort. To be honest, there was a time when I even believed this crazy notion myself. But that changed. As I worked towards my dream, I realized that I had the power to see it through. I just needed to remain committed. Persistence and perseverance are skills I have honed. I would like to introduce the notion to young women that their frustrations, anger and trauma can be turned into something optimistic. I stumbled on to the fact that my outlet was music. What I did with that was to move forward in working towards that idea. I am the hope and proof that anyone can do it regardless of age, colour, gender, or social class.”

Listen to “Best Is Yet To Come” below, and find out more about Rachelle via our mini-interview.

I am Rachelle Show, a singer-songwriter here in Toronto, Canada. I started singing when I was 10 years old after my father’s Show-Do-Man Juno award nominee passed away back in 2011. Since then I have been striving to succeed in the music industry no matter what obstacles I had to overcome.

You recently shared your new single, “Best Is Yet To Come”, what can you tell us about the writing process behind the song?

Back in 2019, I chose to escape a toxic emotional, and physically abusive environment at home. One night I decided to pack my things and leave because I decided then that I deserved so much more than I was tolerating. I started to write “Best is Yet To Come” when I was couch surfing between friends’ homes in hopes that a brighter future was ahead. Funny story, I auditioned this song for the Honey Jam 2021 program with only one verse and the hook written. I wasn’t expecting to get accepted but I did, and I had to rush to write and record the rest of the song within 1 week of getting accepted into the program haha, funny times. It was extremely difficult to write because I had to face my trauma after being away from it for so long. I had to communicate what I was feeling and re-live those moments. But I had the help of Darryl Riley from Newnu Entertainment to assist in getting my feelings down on paper. I was also scared to share my story; I didn’t feel that it was okay to share what I have been through because I was suffering in silence for the majority of my life. But once I started speaking about it so many people came forward and asked for my help to get them out of similar situations. So I then thought what better way to start my career with not only my story but by offering a helping hand.

The single is part of your five-song EP, set to release in December, does this track set the tone for the rest of the EP?

It definitely sets the tone for the EP. My goal for this release is to talk about another side of pain involved in this life, not just heartache, and breakups. But what you feel when you’re in a toxic situation, when you suffer a loss, how to get yourself out of negative situations, and how to rely on yourself when there’s no one else to turn to instead of selling your body or your soul because at your lowest anything seems better. I am playing around with a few names for this EP, so far my favorite is Window To My Soul. I want my music to touch the many who feel lost, forgotten, betrayed, and hurt in hopes that my music and my story can be a beacon of hope that the Best Is Yet To Come no matter what situation they are facing.

I see you’ve been accepted into round 17 of The Remix Project? What can you tell us about that?

Yes! Honestly, a dream come true. I discovered this program during my couch surfing days. I was researching Toronto artists who have broken the glass ceiling and made a name in the music industry, and I discovered Jessie Reyez. Turns out she went through the Remix project a few years ago and I decided then that I HAD to be in the program. So this is super exciting, so far I got introduced to all the other creatives in round 17 as well as the team at remix and I am nothing but excited for what’s to come.