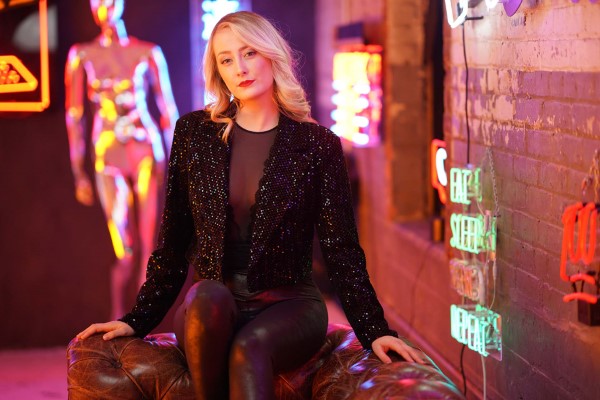 “In country music, women are often presented as dwelling on past relationships by drowning in a box of ice cream or a bottle of wine. I wanted to break away from that perception and offer a fresh take on the post-relationship mindset. With Bobbi and David, wrote a sassy and empowering break-up anthem for all the strong, single women out there who want to let go of yesterday’s heartbreak. Starting over doesn’t have to be so sad. The thrill of indulging in new adventures can also be fun and liberating.”

Check out “Kiss Strangers” below, and find out more about Emily via our mini-interview.

I’m Emily Clair, a country singer/songwriter from Ajax, Ontario. I’ve been singing since I was two years old and releasing music since 2018. Singing has always been a passion that I’ve pursued throughout my entire childhood and adolescence.

Recently, I released my first EP called Stripped, which is a collection of all seven tracks that I’ve released over the past few years, acoustic and live off the floor with no edits.

My new single “Kiss Strangers,” is now out and is the first song off of my first full-length record that I’m currently working on called Stealing Hearts.

You have unveiled your new single, “Kiss Strangers”, what can you tell us about the story behind the song?

“Kiss Strangers” is every gal’s breakup anthem. So, save the cake and ice cream because he isn’t worth it! It’s a fun and sassy song about getting strong and moving on from heartache.

You co-wrote this track with Bobbi Smith (The Heels) and David Borys – how was that experience?

Writing this song with Bobbi and David was a great experience. This was our first writing together, and it went extremely well! I typically know off the bat if I’m going to release a song or not, right after I write it, and I knew this one was one of those songs. It’s pretty rare that you write with people, and on each write, you constantly pump out good tunes. I’ve written with Bobbi and David two other times since “Kiss Strangers,” and I definitely have more releases coming down the pipeline with these two!

The single comes from your upcoming full-length album, Stealing Hearts. What can you tell us about the collection of tracks on this release?

In 2022, I plan to play a lot of live shows. I miss connecting with my audience, and I’m so glad that live music is back! During the pandemic, my fellow artist Amberlea Bruch and I started a writers round called The Songbird Series, a writers round empowered by women in country music. We will be kicking off our first live show at The Grove Theatre in Fenelon Falls, Ontario on June 17th. There’s no other place I’d rather have the first show than at this stunning venue. It’s an intimate, outdoor theatre in the woods of the Kawarthas, the perfect spot for storytelling and country music.