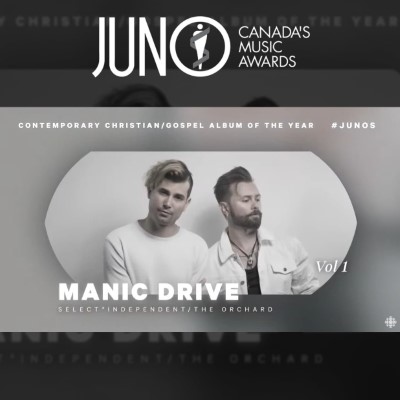 Toronto, ON-based pop-rock band, Manic Drive is back up of brothers, Michael and Shawn Cavallo. The duo have recently had their album, “Vol. 1” nominated for Contemporary Christian/ Gospel Album Of The Year at the 2022 Juno Awards, which will be hosted by Simu Liu at Budweiser Stage on May 15.

This is the band’s third consecutive album to be honoured at Canada’s most prestigious music awards ceremony. The first was their critically acclaimed VIP, which won them a Juno Award in 2015. The second was their Billboard chart-topping Into the Wild, which earned them a Juno Nomination in 2019.

“Being recognized amongst Canada’s top talent is overwhelming, humbling, and unexpected,” explains the band. “We write songs as an expression of our hearts, and when that love gets returned, it’s one of the most fulfilling moments you can have in your career. We’re so grateful to our fans and our industry peers who believe that we’re worthy of this nomination.”

Listen to Vol. 1 below, and find out more about Manic Drive via our Five Questions With segment.

Hi! This is Michael and Shawn Cavallo, brothers that form the mighty Manic Drive! A Pop-Rock Duo that grew up in Mississauga! Music has been a huge part of our lives since we were kids. Not only do we love Rock N Roll and pizza, but we are also masters of the art of foos-ball!

Our latest album “Vol 1” is the beginning of a musical saga where we hope to have the following volumes (shorter albums) journeying through topics of faith, love, loss and hope. We also love to touch upon more fun and light topics. Reminding people to enjoy life and count our blessings. We’ve been known to mesh different musical elements into our music, adopting Rock, Pop, Hip Hop and EDM, which has emerged to this Edge Pop sound. We had the honour of doing a collaboration with Mr TalkBox (Bruno Mars, Toby Mac) featured on our track “High Life”. Really gave this amazingly cool retro-hip hop vibe. We love venturing into projects like that. Makes the writing/recording process engaging and fun.

When the pandemic hit, we were already anticipating locking ourselves in the studio and focusing more on releasing music videos, virtual concerts and live interactive chats. Since the tour life had been halted, we tried our best to capitalize on the time we were given. It was also an opportunity to spend more time with family. Something you lose as travelling artists. There are always blessings to be gained, even in a dire situation. It helped us to remain positive.

We literally have a list of Canadian artists we would love to work with. It’s an incredible task to only choose one haha. Our influences range anywhere from The Weeknd to Our Lady Peace. But to do a collaboration with Michael Buble we think would be awesome. It would be something new and different. You down Mr Buble?

We are excitedly in the midst of recording “Vol II”. We hope to have it released later this year, following “Vol 1”. Thrilled to be hitting the road again, touring across America and Canada. Most definitely followed by more music videos, singles, interactive live chats, skits and collaborations. And of course, kicking it at the Junos again! It’s looking to be a busy year.