Home / Promos / The Blue And Gold release new single, “When The Levee Breaks”

The Blue And Gold release new single, “When The Levee Breaks” 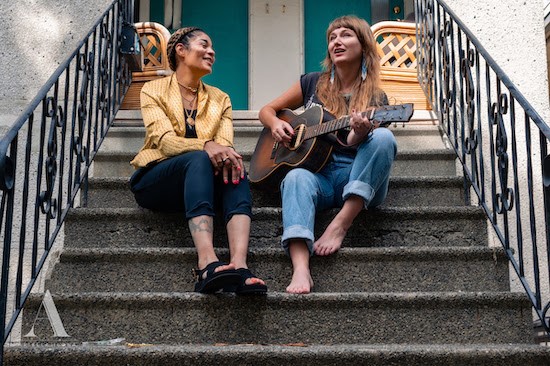 Vancouver, BC-based duo, The Blue And Gold, made up of Juno nominated and WCMA ‘Blues Artist Of The Year’ Ndidi O and folk-roots guitarist/banjo player Trish Klein (The Be Good Tanyas, Frazey Ford, Po’ Girl), have unveiled their new single, “When The Levee Breaks”, which follows their previous release, “Honey In The Rock”.

“When The Levee Breaks” is the second single released from the duo’s upcoming self-titled debut album, which is set for release on April 29, 2022. The song is a reinterpretation of the country blues classic first recorded by Memphis Minnie in 1929.

“Born in 1897 in Algiers, Louisiana, Memphis Minnie was one of the earliest blues guitarists on recording and one of the most prolific musicians of her era,” says guitarist Trish Klein. “She wrote and recorded over 200 songs, and was an intricate guitarist and innovator—her up-the-neck guitar solos are considered visionary and ahead of their time. Her songs have been covered by the likes of Led Zeppelin, Jefferson Airplane, Fleetwood Mac, Taj Mahal, Muddy Waters, Alabama Shakes and many others. Her impact on the evolution of Blues music cannot be overstated. We are honoured to be releasing a version of her classic song ‘When The Levee Breaks’.”

The duo’s self-titled debut album is a musical homage to the profound influence of black female artists on 20th-century country/blues traditions and on the evolution of all modern music. The album contains 11 songs recorded with authenticity, soulfulness, and grit, including reinterpretations of the works of pioneering female artists Memphis Minnie, Lottie Kimbrough, Mamie Forehand, Jessie Mae Hemphill, Sister Rosetta Tharpe, and others, as well as one song by the legendary Indigenous songwriter Buffy Sainte-Marie.

Listen to “When The Levee Breaks” below, and stay up to date with The Blue And Gold via their socials.