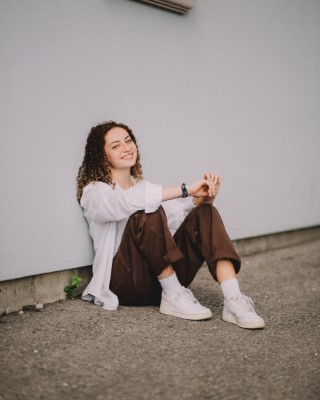 Canadian R&B/Soul singer-songwriter, Avery Raquel is set to release her self-titled album on April 7, 2022. The album features previous singles, “Please”, “Helpless”, and “All Up To You”.

Speaking of her latest single, “All Up To You”, Avery blends signature R&B sound with 70s-inspired funk elements. The track highlights the idea of laying your cards on the table for someone and relying on them to make the right decision for you.

“If I could pick a favourite section, it would be the chorus:

You may have me crying
you turn my heart just like a key
your smile’s so distracting
if it’s meant to be, we’ll be
it’s true, it’s all up to you

The whole chorus contradicts the previous lyric to show the thought process of the trials and tribulations of a complicated relationship. You want to see all the good things, but they’re usually followed by red flags. I think this is a relatable chorus to anyone as it can be romantic or platonic”

Avery will be playing a release concert in Toronto at Bar Cathedral on April 7, so be sure to grab your tickets HERE.

Watch the video for “All Up To You” below, and find out more about Avery via our Five Questions With segment.

Hi! I’m Avery Raquel. I am an Alternative Soul Singer/Songwriter and Billboard charting artist. I’m originally from Brantford, Ontario but am now living in Toronto. I have recorded and released 4 solo album projects since 2016, plus an additional Remixes EP. I started singing at the age of four and then started to learn violin, followed by piano soon after around age 7. I started singing professionally around the same time, primarily in the Jazz genre. As I began songwriting for my 2nd album and into my 3rd, my style began to shift into more of a mainstream RnB/Soul. I’m now about to release my 4th album, a self-titled project of newly penned songs with a mix of Soul/Rnb/Pop and my Jazz and Blues experiences.

Music has been a part of my life for as long as I can remember. I love continuing to learn/teach and develop my understanding of the language of music.

Tell us a bit about your most recent release

My 4th album with be released on April 7th. I have never been more excited to share my music with people; this release is quite special to me. Over the years and ever since I started writing at around age fifteen, I always had assistance with the creative writing process of my songs and most of them always had co-writing credits. For this new record I wrote every single song by myself. So, it is safe for me to say that this project is 100% entirely ME. That’s why we decided to simply self-title the release, as opposed to giving it a name or using one of the songs as a title. Each song discusses a different kind of love, whether that be losing a loved one, finding new love, unconditional love and finding love for yourself. I can’t wait to share all of my thoughts and emotions with everyone.

Every song on this album was written and recorded during the pandemic. All of the instrumentation was recorded remotely (Drums in LA, Bass is Montreal, Keys in Toronto, Guitar in Seguin ON) My producer Nick Tateishi (who also played guitar) was staying at a cottage in Seguin and I had gone up for a few days at a time to record my vocals. Due to lack of studio space, we recorded all of my vocals literally in a closet! I have certainly never done an album project this way before but I would be thrilled to do it this way again!

When it all first started in 2020, I think every artist around the world really didn’t know what to do with themselves, including myself. I had just released an EP of an original remix which peaked at #30 on Billboard. I was a few days away from traveling to the US to perform a couple of shows when the first lockdown hit.

So, to make use of the time, I started a bi-weekly live stream hourly entertainment show that was broadcast on both Facebook and YouTube simultaneously live. During every show, I had a handful of musical guests on, and I would interview each guest and they would perform. This ended up running from April 2020 all the way to November 2021. I had over 100 guests on the show and some of them I never knew I would have the opportunity to talk to. From Broadway stars to Grammy winners, American Idols, and many Canadian artists. People like; Canadian artists, Sean Jones, Stacey Kay, Laila Biali, Canadian Television Icon Dini Petty, among others like Lesli Margarita (Broadway star), Jim Caruso (NYC), Amy Wadge (Grammy Winner & Co-writer with Ed Sheeran), Amercian Idol Justin Guarini, and so many more!

I was already involved as co-host of a weekly radio show called ‘The Memphis Show’. It focused on the music I love, from Jazz and Blues to RnB/Soul and its influence on popular music. That continued through the pandemic and continues to this day.

I was also fortunate to have landed a number of high-profile national television commercials which aired during the pandemic, and I was able to do a number of live-streaming paid concerts.

However, more importantly, I was able to take this COVID time to focus in on myself as an artist and work on my songwriting. I spent the whole month of May in 2020 doing a songwriting challenge for myself where I wrote 3 songs a week for the whole month. It was incredibly mentally exhausting but so liberating and I would do it again in a heartbeat. It really allowed me to focus on my artistry and kept me sane during the many lockdowns.

This is a tricky one! Oh my goodness.

I listen to a very wide range of music, genre-wise. So, I would be pleased to work with ANYONE. The two that stand out to me the most would be Joni Mitchell and Oscar Peterson. I would be honored to work with Joni Mitchell and pick her brain about every aspect of her songwriting process. As for Oscar Peterson, I am, and always have been inspired by jazz, and I think it would have just been wonderful to say that I sang with him and his trio of incredible musicians.

I want to get back to as much “normal” as I possibly can, with caution of course. I am so thrilled that in April, after my album release on the 7th, I will be going on a small Northern Ontario Tour and have the chance to perform for real people again! I’m also starting to fill my dance card once again in Spring and Summer with the many music festivals opening back up.

For the remainder of the year, I will be continuing to write, perform and record as much music as I can. I want to stay busy and gain the momentum back that was otherwise lost the past 2 years.