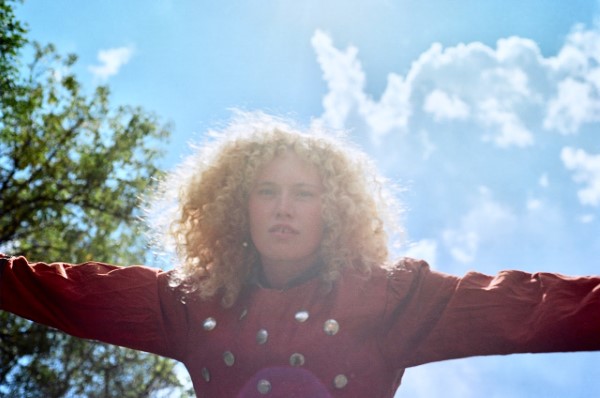 Toronto, ON-based Blunt Chunks, helmed by Caitlin Woelfle-O’Brien (Jaunt) has announced its debut self-titled EP will be released on May 6, 2022, via Telephone Explosion Records. You can pre-order it HERE.

Embracing a weightless style of guitar-driven pop, Woelfle-O’Brien blends spacious psychedelic country with the unignorable churn of 90s alternative rock. The result is a record deeply uncomfortable with secrets. Instead, Woelfle-O’Brien opts to honor — with a Dolly Parton-esque devotion to clarity — her motivations for past entanglements, both devastating and exalting. And yet, the EP rings with quiet optimism, steadfast in its search for the kind of love that’s attentive, honest, and transformative.

“The EP is about not knowing how to love properly, then being frustrated when heartbreak happens,” Woelfle-O’Brien explains. “It’s about escapism, and wanting to be the best person you can be; not just for not just yourself, but for the people around you. I’d like to say I’m writing from a place of joy and gratitude, but I’m not writing from a place of hunger, and sorrow, and stubbornness. A big theme for me is continuing a dedication to love despite everything, not quite in a Christian way, but in a bell hooks way.”

In advance of the EP, Blunt Chunks has shared the new single, “Natural Actors”. The track is a stunning intro to the new EP gently placing Caitlin’s scintillating vocals on top of twinkling piano and off-kilter percussion. Speaking about the track, Woelfle-O’Brien says:

“I wrote this song in 2015/16 when I was in a relationship with someone who I was also living with. He would go to work in the mornings and I would wake up slow, drink too much coffee, and kind of mill about until I went to work in the afternoon.

“This day I had eaten cotton candy for breakfast (leftovers from going to The Ex – a big fair in Toronto – the night before) and had too much Turkish coffee and was wired. I had been drinking wine every night since the previous holiday season so I was a bit ashamed of my health. I sat down and wrote the song in one go and recorded it into my laptop mic. As I finished the recording, my partner walked through the door. It was about him but hopefully he didn’t hear it, lol. The beds were recorded at the now-defunct Trailer Studios in the East End of Toronto. People say the lyrics to this one are strange/unique and I guess that’s true! It’s just a domestic song, I feel like it’s my “unhappy housewife” song. Like a woman in the wrong place for her own light to shine. I’ve struggled with that a lot over the years.”

Check out “Natural Actors” below, and stay up to date with Blunt Chunks via her socials.