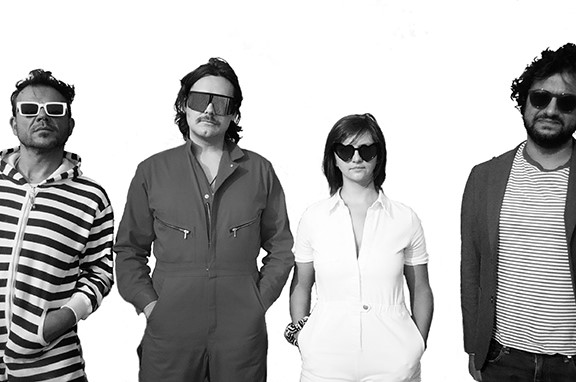 Canadian art-rock quartet AUS!Funkt have unveiled their single, “Set Yourself Free”, along with a video to accompany the release.

Pulled from their newly released EP, Human Response, the track offers a straightforward message through its unconventional mash-up of the Toronto-based band’s signature blend of post-punk surf-rock, psychedelia, and electro-funk.

“This song came together pretty quickly, and was one of the first we wrote together as a group,” the band recalls. “Michael Wallace of Preoccupations helped produce this track, and added some percussion and tape-delayed vocal effects.”

The video for “Set yourself free” — which simulates a real beach using a green screen — pays homage to Toronto’s legendary Bloordale Beach, a spot that holds a special and somewhat symbiotic meaning for the band, who are Miroslav Miskovic (aka Jozzef Ladovina), Evan Henderson, Olivia Korwan, and Hugo Frutuoso.

“Bloordale Beach was a big, empty lot south of Bloor and Brock that a community of artists and locals transformed into a hangout spot that anyone could enjoy,” the band shares. “Unfortunately, it’s now been demolished; but we are proud to preserve its legacy with our video.

“Bloordale Beach fits the concept of AUS!Funkt perfectly: the area was repurposed to serve as a playground for the creative community in the same way we reuse and repurpose musical ideas to recreate different, constantly changing versions of songs when we play live.

“This is particularly important when we see more and more music venues and rehearsal spaces disappearing in Toronto,” they continue. “It’s important to not forget, as we tend to set ourselves free, that we should also aim to free the spaces from the cuffs of bureaucracy for people to push the barriers of art; Bloordale Beach was one of those attempts.”

Watch the video for “Set Yourself Free” below, and stay up to date with the band via their socials.