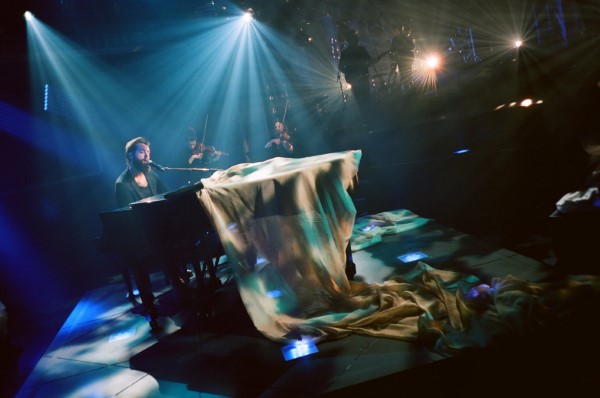 Quebec-based singer-songwriter, Ryan Kennedy teamed up with Whitebox Play to give us all a live experience of his third album, Libertine, which was released in February. The performance recording took place at Le National in Montreal with a 13-piece band and aired last night.

The performance started off strong, with “Wild Sky”, which is just a simply beautiful song, in every way. The piano, Ryan’s vocals, plus the backing band all mingle together to create a listening experience that’s nothing short of amazing. Then, add in the live aspect, and wow, just wow.

In between songs, we get the chance to listen in on a Q&A session between Ryan and his producer, Dimitri LeBel-Alexandre, which is an excellent addition to give the viewer something unique and engaging.

Next up was “Heartbreaker”, which is more upbeat, and showcases the strength behind Ryan’s vocals. This one had my toes tapping and body swaying the whole way through.

After another brief Q&A, we are treated to “Fast Ride”, and a beautiful light show. This track falls somewhere in between “Wild Sky” and “Heartbreaker”, as far as tempo goes. I wholly enjoyed the backing vocals on this track as well. This is another “sing-along” track, for me at least.

“Say Hello” came next, and if you read my previous article around the release of Libertine, you would know this was one of my favourites. It has everything I stated above, and more! There’s something about this song, even after it’s done, it stays in your head, playing over and over again.

The Q&A between tracks continues to offer a great interlude, and I always enjoy to learn more about one of our great Canadian artists.

The fifth song performed was “See You There”, it has a slightly increased country/ roots vibe, which is fine by me. I love all genres of music, and always enjoy when artists blend genres, especially when it’s done as flawlessly as this.

With only two songs left in the showcase, we hear “A Lifetime”, which is my second favourite on the release. It’s another piano-heavy track that incorporates strings and more to create, as I said in my album release article, absolute perfection. The performance was very emotional and intense, which added something extra special for the viewers.

To end off the performance, we’re treated to “Burning Cult”. The instrumentation behind the vocals is incredible. I felt as though I was there, in person. That in itself, is a true accomplishment for Ryan, but also for everyone who worked on this production. As the credits roll, and you see just how big of a team it takes to put together something as amazing as this.

I highly recommend you take 40 minutes out of your day, sit down, and enjoy this broadcast. You will not regret it, and while you’re at it, check out Libertine on your favourite streaming or download service.