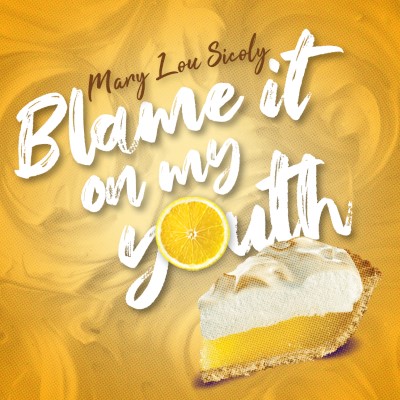 Written by Oscar Levant and Edward Heyman in 1934 and recorded throughout the decades since by the likes of Bing Crosby, Rosemary Clooney, Nat King Cole, Connie Francis, Chet Baker, Holly Cole, Aaron Neville, and Jamie Cullum, “Blame It On My Youth” has stood the test of time as a relatable tale of guileless love.

“I fell in love with the lyrics and, of course, the gorgeous melody,” Sicoly notes as to why chose to record this classic. “Being raised in a household where a sense of humour was the recipe for keeping young at heart, I’ve always had a sense of whimsy.”

That sense of whimsy found its way into the recording as well. Originally a ballad, Sicoly’s bright version of “Blame It On My Youth” is full of sunshine and rhythm. It’s an intriguing musical dichotomy of a lyrical lament set against a very festive soundscape. For that unexpected, bold, and ear-pleasing treatment, Sicoly gives full props to her longtime musical director.

“This song was arranged by my brilliant Musical Director, John Ebata,” Sicoly shares. “In a completely different style than the original, he gives it a Latin feel — cradled in a blend of colourful percussion and driving, Cuban-style bass which makes the vocals pop.”

“Blame It On My Youth” is the first single released from Lemon Meringue Pie, the 10-song debut album Sicoly and Ebata started working on pre-pandemic. The album will be released on May 10th with a launch concert at Toronto’s famed Jazz Bistro. It will be as much a celebration of a great musical partnership as it will be for the music itself.

“I feel that collaborating and working with people has to begin with a mutual respect for each other’s talents as well as a genuine chemistry that allows the flow of ideas to make good music,” Sicoly says. “I am blessed to have that dynamic both with my Musical Director and the musicians with whom I work.”

Listen to “Blame It On My Youth” below, and stay up to date with Mary Lou via her socials.