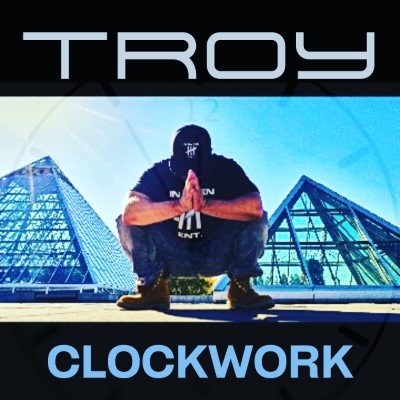 On the single, he worked with Toronto-based producer, FRESH KILS, and DJ Baggylean on the cuts and visuals by Asmyth Production. The result is an astounding video to accompany the new vibe track.

TROY is currently hard at work on a full-length album under the artistic direction and mentorship of the Canadian hip-hop icon, Saukrates.

In the meantime, he will have two more releases coming this summer, “Tug O’ War”, which is a song to his father, and “Suicide Note”, a self suicide intervention with some representation of why in relation to his little sister’s death and the reason why his former alias AMBIGUOUS is dead”.

Until then, check out “ClockWork” below, and find out more about TROY via our mini-interview.

You recently unveiled your new single, “ClockWork”, what can you tell us about the writing process for the track?

Sure. The beat melody inspired the hook first. The hook-chorus kinda came to me and after playing with that, the concept developed.  I had a song that was about…time. So I’m thinking to myself, how is time itself, relevant to TROY, to ME. And instantly the story of grandma Moses came to mind. If you don’t know her, google her.  I relate to her immensely in my belief that it’s never  “too late.”  But the concept needed more. I needed to express why I held this belief so close to me. And that brought me back to my childhood. Being terrified that my life was over when I was 5 ( or 6) or both when child services took me from my home.  Sometimes we as humans feel our lives are beyond our control and believe we perhaps are powerless. We are not. I couldn’t allow life’s pain to dictate who I am.  Even as a child, God gave me faith. At any age, at any time. Faith is key.

The video for “ClockWork” has also been released, what was the highlight of the video shoot?

The highlight was leaving full creative control to my homie Andrew, the owner of ASmyth Productions. I’m the one behind all of my video ideas and concepts. This was my first time not being in control.  For this one, he took full creative reigns and creative management. He thought of every video detail.  I couldn’t be happier. My dawg’s a creative genius.  My boiiii!

You collaborated with Toronto producer, FRESH KILS as well as DJ BaggyLean, how was that experience?

It was dope. Fresh Kils is a great producer from Toronto and Baggylean an inspiring practitioner of his art here in Edmonton. I’ve known both artists for some time and was fired up to see how we all blended this together. I have to S/O the homie Chubbs from Sound Proof Studios in Edmonton too. He did the final sound mix and the song would not sound this killer if it wasn’t for my complete team! Booya! Thank you.

You’ve been hard at work on your full-length album, working Saukrates, what can you tell us about your time working with this well-known Canadian hip-hop artist?

It’s surreal. He is a Canadian hip-hop icon and globally respected musician. I worked with him prob 10 years ago but now it’s different. I mean, he’s the real deal, paving the way and assisting many professional and famous artists. I mean, he was a major reason Drake is where he is today. He works with the world’s best. Method Man, RedMan, Xhibit, etc. Toured ith Nelly Fertado. I’m on the phone with him weekly. I’m blessed. There is no other way to say it. Win or lose, I already won. He is my creative mentor. I learn from him. He is genuine and believes in my ability. It’s gods work. We are working on some upcoming projects, yes, but I can’t say much more about that…yet.