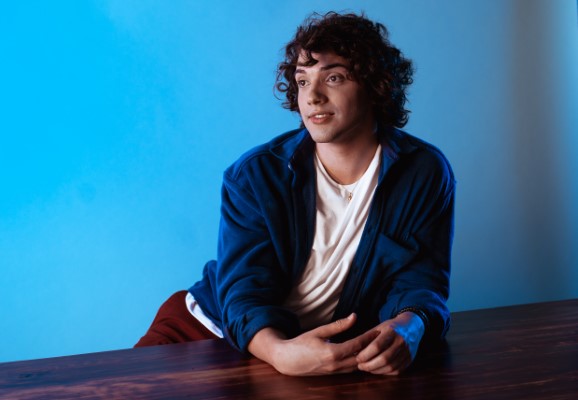 Toronto-bred, LA-based electro-pop singer-songwriter, John Conlin has recently unveiled his new single, “It Doesn’t Matter”, and today he shared a video to accompany the release.

The track features Conlin’s agile vocals and 80s sound effects while paralleling his optimistic outlook on life and love through its rose-colored lyrics and visuals.

The video features Conlin dancing in front of abstract colours, singing of love in a way many listeners may not have heard since they were tasked with dissecting 16th-century literature in high school- unrelenting and overcoming everything life throws at it.

The beat, lyrics, and mesmerizing effects of the video all add to the listening experience, and I have to admit, I had it on replay for quite some time and enjoyed every second of it. By the end of it, I was singing along, and dancing around my kitchen…trust me, it’s a good thing that you missed that.

Check out the video below, and find out more about John via our mini-interview.

Hey! My name’s John Conlin! I am originally from Toronto and now live in LA. I am a maximalist pop artist, influenced greatly from the massive pop overtaking of the early 2010s. Most importantly though, I am a “hopeful romantic.”

You have unveiled your new single, “It Doesn’t Matter,” what can you tell us about the writing process behind this release?

I was toying around with my keyboard in my parent’s basement at 1:30 in the morning, just trying to find some sort of inspiration. I ended up noodling around until I found the perfect chord progression and then started to spitball melodies. I’m usually a “melody-first” writer, so this is typically how all my songs start out. I then started to hum this slightly syncopated rhythm that eventually turned into the pre chorus and immediately, I spat out the lines “but just for tonight, IT DOESN’T MATTER” and I knew I had this catchy, monster of a hook on my hands. When it came to finishing up lyrics, I wrote about unconditional love for your partner and how, when you know that they’re the right person, nothing else matters and you know that everything will always be alright.

You will be releasing a music video to accompany the single on March 29th, what was the highlight of the video shoot?

Yes! I’m super excited cause it’s my first video ever. I’d say the best part of shooting the video was working with this massive screen behind me that projects these different splashes colours and shapes. In pre-production meetings, I told everyone that I was going for a “mid 2000’s iTunes visualizer” aesthetic when it came to what has happening in the background and I’m so glad we pulled that off.

You moved from Toronto to LA to pursue your music career, what would you say are the main differences in the music scene between the two?

I’d say the main differences between Toronto and LA’s music scene comes down to the genre. I find that Toronto has a more alternative vibe whereas LA has always been a major hub in the pop music sphere. As a pop songwriter, LA made the most sense to spread my roots and grow.

Lots and lots more music! I kind of went back to the drawing board about “my sound” as an artist at the start of the pandemic and I’m super excited to release all these songs that I’ve been working on for so long and share my pure pop perfection with the world.