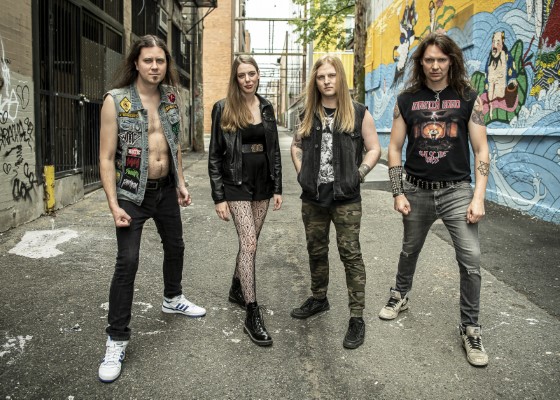 In 2020, Calgary’s own Hyperia released their debut album, Insanitorium on Latvia’s Sliptrick Records for up-and-coming artists that you need to look out for. Fast forward thru a pandemic that canceled a worldwide tour and a life-changing relocation to Vancouver, 2022 sees Hyperia release their second full-length album Silhouettes of Horror. Silhouettes of Horror is self-produced with Guitarist Colin Ryley behind the soundboard with mixing and mastering of the record by renowned sound engineer, Mika Jussila of Children of Bodom and Nightwish fame.

Silhouettes of Horror sees Hyperia bring a fast, melodic, and energetic sound that will satisfy old fans of thrash metal as well as stimulate the senses of new fans abroad. Silhouettes of Horror follows the themes of everything around the subjects of government experiments and sleep disorders that invoke night terrors in one’s consciousnesses.

Leading up to the release of their second album, Hyperia released a second single called “Experiment 77” which follows the government experiments that took place in 1954 Kentucky involving multiple doses to a human subject over 77 straight days. While the track starts with a single guitar riff, the song takes a turn to a powerful fist-pumping, headbanging double kick drums and bass solos that are complimented by neo-classical melodies.

Hyperia are set to return to The Gateway in Calgary Alberta on April 9, 2022, for their Album Release Party, which is where they held their first sold-out concert in 2019 for the debut EP, Fish Creek Frenzy. Melodic and thrash metal fans are in for a treat on their Western Canadian tour. Get more information HERE.