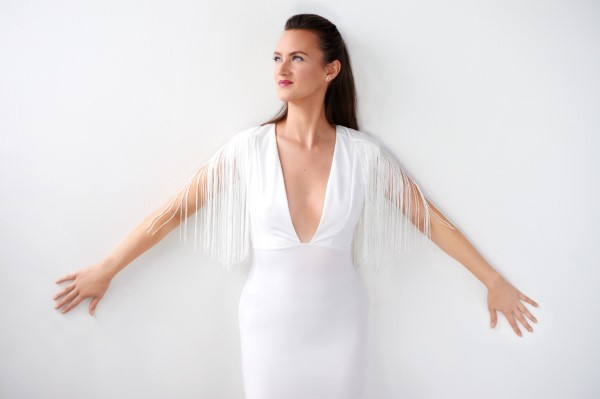 The album is co-produced with producer, engineer, and multi-instrumentalist Jonas Bonnetta (Evening Hymns, Dark Watchers). Bonnetta recorded it in his beautiful cabin studio called Port William Sound, in the countryside of Mountain Grove, ON. Edwin Huizinga (The Wooden Sky, Fire and Grace) plays strings on the tracks. Future Memory was mixed by James Bunton (Ohbijou) and mastered by Gavin Gardiner (The Wooden Sky). The album was recorded in nature and is infused with the sounds and inspiration of the natural world.

Take some time and listen to the 8-track album below, and find out more about Caylie via our Five Questions With segment.

I’m Caylie Staples, a singer, songwriter, producer, and performer based in Toronto. I have a B.F.A. Honours in Music from York University and have studied intensively with NYC-based vocalist Shelley Hirsch. I write and perform songs for my self-titled solo project, as well as in a variety of projects including dream noise duo Glass Salt, interstellar avant-rock band Anthems of the Void, an improvising duo project with cellist Matt Brubeck and electronica co-writing project with Morgan Doctor.

My new solo album Future Memory brings together the realms of celestial pop, singer-songwriting, and electronica. It explores lyrical themes of love, resilience, rebirth, awakening, freedom, and nature. The title Future Memory speaks to the interplay of time and our human experience of relationships. Many relationships transcend time. This includes ancestral connections, the knowing about a person that you haven’t yet met, looking back into memories to change something in the present, and other experiences in relationships that transcend time.

I co-produced Future Memory with producer, engineer, and multi-instrumentalist Jonas Bonnetta (Evening Hymns, Dark Watchers). Jonas recorded it in his beautiful cabin studio called Port William Sound, in the countryside of Mountain Grove, ON. Fantastic violinist Edwin Huizinga (The Wooden Sky, Fire and Grace) plays strings on the tracks. Future Memory was mixed by James Bunton (Ohbijou) and mastered by Gavin Gardiner (The Wooden Sky). Recorded in nature, Future Memory is infused with the sounds and inspiration of the natural world.

With the lockdowns and restrictions over the past two years, I adjusted my approach and found ways to perform. I also kept myself in the public eye through film, social media, and online releases. I co-wrote a song with Morgan Doctor that is part of the score for Ondi Timoner’s powerful film Last Flight Home which premiered in Sun Dance Film Festival in January. I also released online albums for several of my other projects, Glass Salt and duo with cellist Matt Brubeck, and released three singles from Future Memory leading up to the full album release.

I would love to work with Canadian producer Daniel Lanois. He has produced incredible albums since the late 1970s with a wide variety of artists, including Bob Dylan, Neil Young, Peter Gabriel, Emmylou Harris, and U2. He is also a songwriter and an ambient musician making exciting work. I would love to learn from him and make a record with his expertise.

My goal for 2022 is to do a fabulous release tour for Future Memory, starting with Canadian and US dates to be announced early summer!