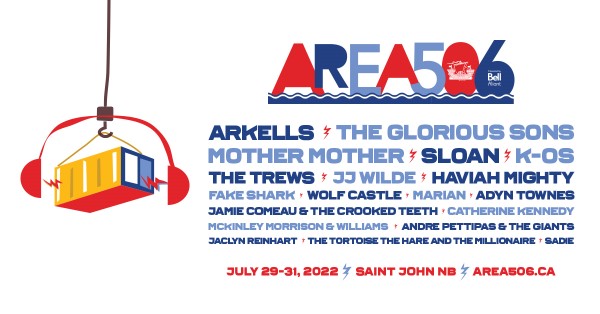 AREA 506 presented by Bell Aliant is set to take place over the New Brunswick Day long weekend, extending the new AREA 506 Waterfront Container Village into the biggest party event of the summer. The Saint John waterfront will come alive from Friday, July 29 through Sunday, July 31, providing three days of music, culture, and goods with headline sets from Arkells, The Glorious Sons, Sloan, and an incredibly diverse supporting lineup.

“Like everyone else, we are excited to get back to the festival format this year,” says Ray Gracewood, AREA 506 Founder and Committee Chair. “We have been working hard over the past three years on this lineup, and it will be great to welcome festival attendees back to a format that provides ticketing options to create their own AREA 506 experience”.

This year will be particularly exciting as it will be the first to take place as an extension of the new Waterfront Container Village on Water Street, in Saint John. The village will host a program of family-friendly experiences including a culture stage, experiential activities, food trucks, and a vendor market throughout the weekend.

This will also be the first year that involves Bell Aliant as a presenting sponsor. “Gathering together with music is what summer in New Brunswick is known for, and at Bell Aliant we’re excited to sign on as a sponsor of AREA 506 and help bring people together again, in person, to enjoy great music and all the festival has to offer” stated Glen LeBlanc, CFO and Vice-Chair Atlantic, Bell.

AREA 506 will offer both general admission and pod-based ticketing options for this year’s event and will be open to all ages, with free admission to those under 12 years of age with adult accompaniment.

The AREA 506 VIP Experience, sponsored by Atlantic Lotto, includes a preferred viewing area, premium sightlines, dedicated washrooms, and a VIP bar. All VIP ticket holders must be 19 years of age or older.