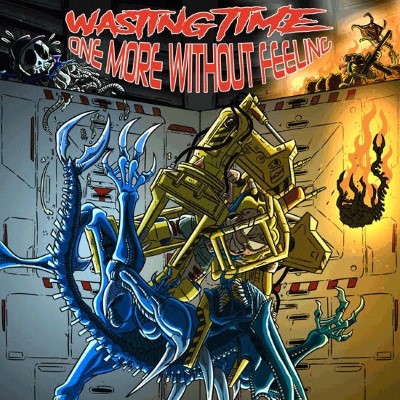 The offering features 10 songs that will take the listener on a magic carpet ride of uptempo romps, melodic choruses, heartfelt lyrics, and a few slower excursions.

The songs were produced and mixed by Steve Rizun at Drive Studios throughout 2020 and 2021.

Tonight (March 25, 2022), the band will play an album release show with their friends, The Anti-Queens and K-Man & The 45s at The Hard Luck Bar in Toronto, and they will have limited CD copies at the show.

Check out the album below, and find out more about Wasting Time via our Five Questions With segment.

We are four pop-punkers from the presently chilly streets of Toronto, Ontario. The band now consists of Vlad on lead vocals and guitar, Mike on bass, Mark on guitar and our newest member, Nick on drums.

Our latest single is “Certain Days” from our upcoming sophomore album, “Once More Without Feeling”, which will be released on March 25th. “Certain Days” is our first acoustic-based song that we’ve released and we’re excited to unleash a new and different dimension of our sound. It was recorded by Steve Rizun at Drive Studios back in 2020 during the pandemic along with the rest of the album.

We tried to keep ourselves as active as possible since the pandemic started. We managed to record our album and started releasing the previous singles from it as often as we could. A couple of live performance videos were made during this time too, which can all be seen on our social media accounts.

With venues now opening back up and music fans eager to see bands rock out in the flesh, we intend to play Anyway, Anyhow, Anywhere and hopefully start work on album #3 before the year’s end.

Upcoming Shows:
March 25th at Hard Luck Bar, Toronto, On (record release show with The Anti-Queens and K-Man & The 45s)
May 19th at Avant-Garde Bar, Ottawa, On
May 20th-22nd at Pouzza Fest, Montreal, Qc