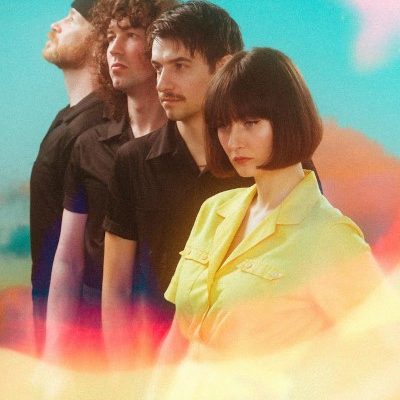 The Vancouver, BC-based quartet, Blonde Diamond is made up of Alexis Young (lead vocals/keys), Malcolm Holt (drums), Louis Hearn (guitar), and Bruce Ledingham (keys). The four-piece has recently released their new single, “Strange Times”, and now they have shared a video to accompany the release.

Directed by Brandon Fletcher, the video, was largely built from sets;

“I spent a month in pre-pro building visuals and scenes, before a single image was even shot. Once we completed production we worked with the band to create this really collaborative atmosphere of world-building to uncover our story.”

“Lyrically the song takes place in a fantastical parallel universe, so it only made sense that the video should represent that,” notes lead singer Alexis Young. “It became clear that we were all hedonistically dancing while awaiting the impending impact of an asteroid that would completely eradicate earth. A visually beautiful, nihilistic fantasy.”

Check out the video for “Strange Times” below, and stay up to date with Blonde Diamond via their socials.