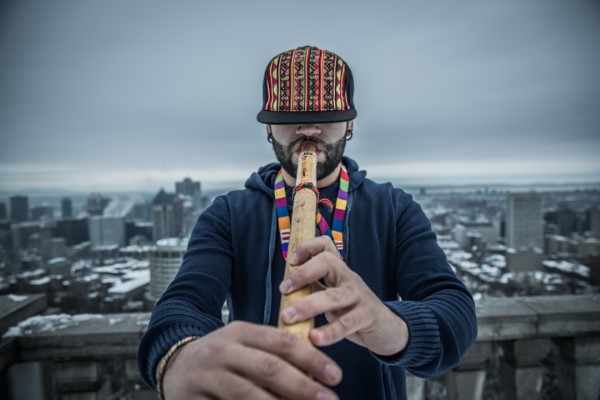 “Nueva Era” is the first single to be released off of Akawui’s debut album, The Future is Tribal.

“Nueva Era talks about a shift of consciousness and the birth of a New Era where minorities around the world (Indigenous people, women, the black community, LGBTQ) who had their voices and rights taken away by the white patriarch movement will now stand and walk freely.”

In his debut role as a director, Akawui has created an incredibly powerful and moving visual aspect to the already deeply meaningful song. Featuring dancers from the Nyata Nyata African dance studio in Montreal, and Akawui, Nelson, and Naskapi performing the song, the visuals continuously pivot to show men counting money at a table held up on the backs of women and men who are visual minorities, including Akawui. Representing the turning of the tables through powerful imagery where those oppressed regain their power, the immensely powerful visual is so captivating that it is impossible to turn off.

Watch the video below, and find out more about Akawui via our Five Questions With segment.

I’m a Chilean-Canadian artist of Mapuche Indigenous origins and grew up in Montreal. I was introduced to music through my father at a young age, who had a South American folkloric band. I started busking with him when I was 3 until I was about 16. I make Urban-Latin music with socially focused lyrics and a variety of musical elements.

I’m so excited about this release. It’s called Nueva Era and I think it brings something different to the Urban music genre. First, it’s in Spanish and English with a strong Indiegnous identity, blending Inuit beatbox throat singing from Canadian Inuit Artist Nelson Tagoona, with a powerful rap from Northern Quebec-based rap group Naskapi, and myself, Mapuche. The lyrics talk about a shift of a world consciousness. Not only empowering Indigenous people but empowering nations and people that have suffered from white supremacy and the patriarchal movement for centuries.

During the pandemic, I stayed active creating new songs and rehearsing, making sure I was ready to hit the stage. Thank God we still had the internet to promote our work. Hahahah!

I have a HUGE admiration for Bryan Adams, even though he has nothing to do with my music genre hahahaha! A singer songwriter who can compose so many good catchy songs and hits deserves my respect! Nowadays, anything is possible musically.

I’ll be releasing my debut album “EL FUTURO ES TRIBAL” ( The Future is Tribal ) and plan to tour with it to as many places as possible, in both North and South America.