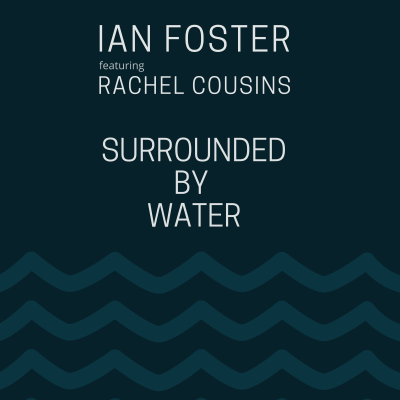 Newfoundland-based artist, producer, and filmmaker, Ian Foster has teamed up with pop songwriter and performer, Rachel Cousins to create a cover of Joan Morrissey’s “Thank God We’re Surrounded by Water”, which they’ve named “Surrounded by Water”.

Foster’s work has steadily moved towards composition and film work over the last several years, and he applied this approach to the music of his homeland.

“To me, the landscape of Newfoundland evokes many feelings, from joy to melancholy,” Foster said. “I think those varied emotions are in the bones of the music we make as well, from the melodies to the multiple meanings the lyrics can have. One day I found myself playing around with the melody of ‘‘Thank God We’re Surrounded by Water,’ and suddenly I was building a string arrangement for it.”

Foster knew he wanted a singer who would approach the song in a different and unexpected way, that’s when he reached out to Rachel Cousins.

“She was my first and only choice,” Foster said. “I knew she was the right voice for this version of the song. I brought her into my studio, played the original, then played my then – instrumental version. We talked a bit about the overall vision, and when the vocal session happened, everything was just in the zone from the start.”

“I was working with Ian on another project and he mentioned this one.” Cousins added “When I went into the studio and heard the song he had in mind I was a little hesitant. I don’t sing a lot of traditional music, but as he went through the concept, I was immediately on board. It was different and interesting and if anyone could make it work Ian would. He definitely pushed me out of my comfort zone with the genre and also the vocal take but I am so honored he asked me to be a part of it. This project is beautiful and compelling, I love the take on a traditional song.”

“Thank God We’re Surrounded by Water” was written by playwright Tom Cahill (1929-2006), basing it on Surrounded by Water by Irish singer/songwriter Dominic Behan(1928-1989). Cahill often collaborated with the late singer Joan Morrissey who recorded many of his songs, including the CN Bus and The Mobile Goat. The song was also recorded by Dick Nolan on the album Home Again This Year (RCA, 1972).*

Check out their cover below, and the original version HERE. The video of Ian and Rache’s version was cut by Ian, featuring drone footage from around the island, courtesy of Nick Coultas-Clarke, Avalon James Drover, and Joe Dominix.

Find out more about Ian Foster via our Five Questions With segment.

I’m a musician, music producer, and filmmaker from St. John’s, Newfoundland. I’ve spent the last decade and a half touring around this country and others, collecting stories and putting them in songs. Since the pandemic began, it has obviously meant a lot more time at home, and a lot more time in studio: a silver lining.

This year’s gonna be an interesting one after a few quiet years, release-wise. I’ve got a new album and film releasing later this year that has been a true labour of love over the last few years. An end of paragraph, or chapter, and the beginning of a new one. Before that arrives, though, I’m getting the word out on “Surrounded by Water,” a really fun project with pop musician Rachel Cousins that is different for us both: a cinematic take on an old Irish Newfoundland song called “Thank God We’re Surrounded by Water.”

The other part of my work has been in film, either writing/directing or scoring, and this release brings that score sensibility to the original song. I love when a cover song reimagines the original in a unique way, and this one undeniably does that. I’ve been happy to receive some good feedback so far, as I wondered at first if I’d get thrown out of music for this one – haha.

We’ve done some live streams and released the single “Voyager” in November 2020, which was a life line for us in terms of connection with listeners we haven’t been able to see in two years. Of course, online is not the same. We’re still figuring out how live shows work in this new age we find ourselves in, but I suppose we’ve all learned to adapt and adapt quickly. One doesn’t know what the future holds, so we’re hopeful for the latter half of 2022 into 2023.

More connection. More collaboration. Not so much a return to something, but rather moving forward into something new and special.