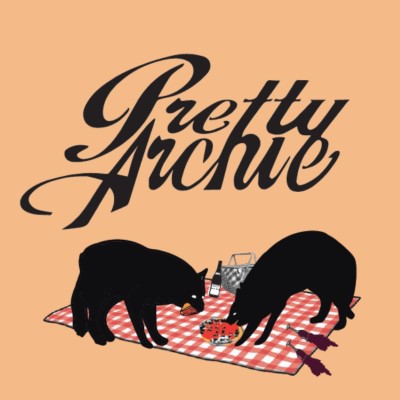 Pretty Archie is the sixth self-titled album of the Cape-Breton quintet.

Overall, Pretty Archie has made an album that is a real live wire mix of folk, americana, bluegrass, alt-country, and East Coast music. To record Pretty Archie, the band set up shop in an A-frame lakeside cottage in Cape Breton to give the tracks a warm, live show feel. As bassist/vocalist/songwriter Colin Gillis says “It was all basically recorded live off the floor, with minimal overdubs…There’s a certain ambiance and energy in recording that way.” This effort really paid off as the album’s energetic tracks greatly recall wooden-floored dance halls you would (and hopefully we all will soon) kick up your heels and sing all the words to. Then, for the share of the melancholy tracks on the album (or “cry into your beer” tracks as Pretty Archie calls them), you can almost hear the bartop you’d stare listlessly over while humming along to the melody. Topics on the album are mostly universal, love, heartbreak, family, and home — though Pretty Archie is careful to also loudly proclaim their status and pride as Maritimers. The opening track’s chorus is even “If your heart breaks down, we’ll use mine. It is weathered and weary, but it is Maritime.” The result is an album that is highly accessible, but undeniably Canadian.

A standout track for me was “It’s You”. This is one of the aforementioned somber tracks, but with particularly lairy, gossamer-like energy. Unlike most other tracks on the album which feature Pretty Archie’s instruments and vocals at full force, here the accompaniment is staggeringly minimalistic. Only nominal guitar plucks, soft tambourine, whispered backing vocals, and soothing synths lightly touch the song. What’s left is only the lead singer, Brian Cathcart’s, husky vocals are forefront as his voice almost cracks over anguished lyrics of lost love. The result is a song that feels so ethereal and delicate, a single gust of wind could blow it apart — entirely fitting for a song about a broken heart.