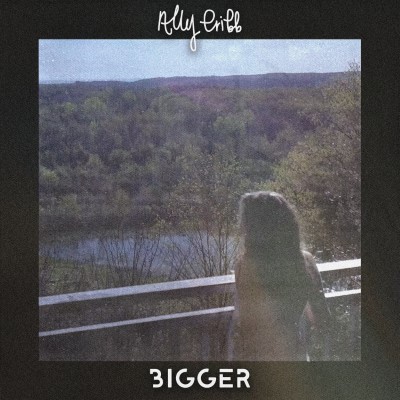 Toronto, ON-based singer and lyricist, Ally Cribb recently unveiled her single, “Bigger”, along with a video to accompany the release. This is her first release, aside from her cover of Radiohead’s seminal track, “Creep”, and is from her upcoming EP, Unbroken.

Produced by her father, a musician, and writer who nurtured her creative expression since childhood, “Bigger” is an anthemic ballad with rousing pop inflections: deeply personal, on the one hand, and yet on the other, carries a universal wisdom that is bound to resonate. “But you can be bigger, bigger / The trick is holding on”, she sings, her voice a lifeline not only for you but for herself, too.

“Bigger is about breaking through the obstacles that convince us to accept less than what we are. I’ve come to understand failure as a source of strength instead of something I should be scared of. I wrote this thinking about the many things I want to accomplish in my life, and the feeling I get when I close my eyes and picture myself standing on a big stage, staring out into a sea of faces. That’s my dream. And however challenging it might be getting there, this song is my own reminder that perseverance and dedication are stronger than the fear of failure.”

Watch the video for “Bigger” below, and find out more about Ally via our mini-interview.

Hi! My name is Ally Cribb. I’m a 17-year-old singer/songwriter from Toronto, Canada. I’ve been singing and playing piano since I was 8 years old and have spent the past year working on my first EP. I started writing my own songs at age 12. That was also when I picked up my first kid-size guitar and my older cousin taught me my first couple of chords. In the spring I’ll be graduating from high school, and moving across the country to attend university. I’m really excited for that next phase of my life. It sort of feels like I have one foot in childhood and one foot in adulthood, and I know these next four years hold a lot of new adventures and excitement.

You have just released your new single, “Bigger”, what can you tell us about the writing process behind this track?

I actually really love the backstory to “Bigger.” I was sitting at the piano in our cottage, in a tiny town in Eastern Canada. I had been playing around with a few different chord progressions when I stumbled across the chords to Bigger. I was immediately hooked. I played the intro to the song and knew I had something special. I called my dad into the room and played it for him, and I think in the next couple of days we had a rough draft completed. I remember sitting there at the piano, thinking about my hopes, dreams, and everything I wanted my future to be. I love Bigger because it sounds like how that moment felt, staring out the window and thinking about all the possibilities of my future if my dreams were to come true.

You have also unveiled a music video to accompany the release, what was the highlight of the making of the video?

The location for the music video of Bigger was so beautiful. We got up super early and got there right as the sun started to come up. Just the idea of being able to make a music video, something I’ve dreamed of since I was 10 years old, was incredible. And the actual experience was even more amazing than I had imagined. It was definitely a lot of fun being able to run through the woods in a pretty dress. It honestly felt more like a casual Saturday rather than a video shoot.

You previously released a re-imagining of the Radiohead classic, “Creep”, what made you choose that song?

I wanted to record my own version of Creep because I think it’s such a versatile song and there are so many ways to reimagine it. I’ve seen some incredible covers of it, people who make it sound totally different from the original. I think it’s important that whenever doing a cover of a song, the artist makes it their own. I really wanted to put my own spin on the song and see if there was a way I could give it my own feel.

You have an EP, Unbroken coming soon, when can fans expect that, and do you have any inside info you can share with us about the EP?

I’ve been working on this EP for the last two years and I’m really proud of each song. Unbroken tells the story of my life and major events of the last two years, and I can’t believe these songs and stories will soon be out in the world for everyone to hear.