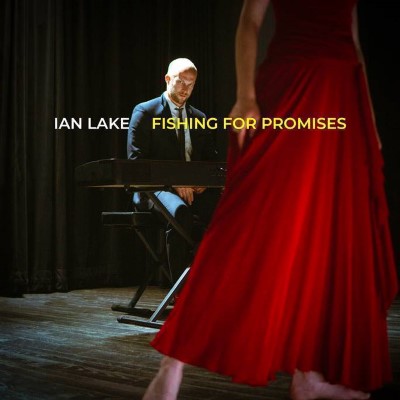 Actor, singer-songwriter, guitarist, and pianist, Ian Lake is set to unveil his single and video for “Fishing For Promises” on March 18, but you lucky readers of Canadian Beats get a sneak peek!

The new single is the third offering from his upcoming debut album, What It is, following “The Bottom” and “Easier”.

“Fishing for Promises” is a lovelorn song that finds its singer torn between holding on too tightly, and letting go completely. The yearning melody is buoyed by an impeccable string arrangement, especially highlighted by an instrumental break of intensely vibrant, briskly tremoloed cello.

“‘Fishing for Promises’ is about feeling misunderstood, and the desire to explain yourself to someone who is not really listening. It’s an imagined conversation that will never take place. I wanted this song to sound like it was almost being sung in private. The song is equal parts clinging to hope, and calmly accepting whatever comes.”

The accompanying video offers a dark, atmospheric interpretation of that illusory conversation.

The song sounds simple, but it took a lengthy, complicated journey to fruition, going through various tempos and several different configurations of instruments before it ultimately revealed itself to Lake in its truest form. It’s easily his most raw and vulnerable song to date.

Check out the video for “Fishing For Promises” below, and find out more about Ian via our Five Questions With segment.

Hi everyone! I’m Ian Lake, I’m an actor and a musician based in Toronto. I have a three-legged dog named Stevie and I like to write sad songs. I’ve made my career as an actor for the last 15 years, and songwriting was mostly just for my own enjoyment, dabbled here and there. But the lockdown of 2020 happened, and I had nothing but free time and isolation, and the result was an outpouring of songs, that I decided I didn’t want to keep to myself. My debut album, ‘What It Is’, is the result of that chapter. It’s an 8 song album, written mostly on piano, blending styles of blue-eyed soul, pop-rock, folk, gospel, and blues. It’ll be out this April.

My new single ‘Fishing For Promises” comes out this Friday, March 18th. It’s a very personal song, that I wrote in the summer of 2020. It’s a piano ballad, with a beautiful cello arrangement by Kevin Fox. It’s about feeling misunderstood, and trying to figure out how give space to someone and love them at the same time. The music video for the song is directed by Natty Zavitz, shot by Martin Wojtunik, and featuring Murphy Macdonald-Rae. We filmed it in Toronto’s historic Paradise Theatre. It explores a conversation I’ve imagined oh so many times but never had.

When it comes to the global pandemic, how were you keeping yourself out in the public eye while not being able to perform?

Well at times I’ve just enjoyed locking myself away from the world, but last year I was lucky to spend most of the year acting on a Netflix show called Locke & Key. So that gave me a nice platform to connect with fans and feel not so disconnected from it all. The third season of the show will be coming out this year, and it should be a lot of fun. I’ve also been able to perform some of my music in virtual concerts. I’m doing a 45 min virtual set for Radio Humber on April 5th. And actually, I’m finally getting out and performing some live gigs. I’ll be at the Cameron House in Toronto this Sunday, and on April 22nd I’ll be playing the Dakota Tavern. Tickets can be found on their website

That’s a great question. I think I’d have to say, Leonard Cohen. It’s hard not to want to know what it would have been like to make music with him in his heyday. To experience how he took his poems and turned them into such great songs. I’d love to just be a fly on the wall in a studio session, or even talk to him about his songwriting process. There’s really nobody else like him in the history of music, in my opinion. I would also just love to have his input when I’m struggling with finishing the lyrics of a song.

Well, I’d love to continue booking live shows and playing my songs in front of real people. I’d also like to record some more music. It’s been hard to think past April, and the release of my album, but I really do miss being in the recording studio, and I have a new batch of songs I’d like to flesh out with a band. Aside from that, I’d love to go on a long road trip to California with my dog, and camp along the way (am I allowed to say that here??? Hehe). I’ve also written a short film that I plan to direct. Making my own album has really shown me how satisfying it is to be at the helm of your own creative project, and I’d love to apply that to my film career as well.