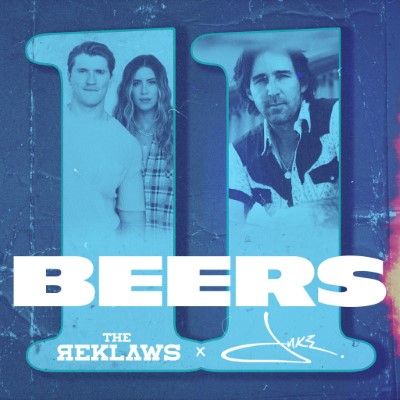 What do “11 Beers,” Jake Owen, and two JUNO Awards nominations have in common? The Reklaws, that’s what!

On March 11, the brother and sister duo from rural Ontario known as The Reklaws dropped their latest single, “11 Beers,” everywhere and it feat. nine-time #1, multi-PLATINUM entertainer and Big Loud Recording artist Jake Owen. This single is an ’80s inspired pop medley that is also a hopeful love song and will surely turn into country’s next party anthem where one can’t help but dance along. This track transports listeners back to the dreamy elation after a great first date and then watching it disappear right before your eyes before the last drink.

The Reklaws’s Jenna Walker says this about the single,

“We know our fans are going to relate to this track because we’ve all lived through losing something before we felt it was finished. We’re so honoured that Jake Owen, an artist we’ve partied to and been inspired by since he changed all of our lives with “Barefoot Blue Jean Night,” agreed to join us on it and bring his signature easy-going, breezy melodies to take this fun love song over the top.”

Stuart Walker goes on to say,

“We wanted to do something a bit different for our next single, but it still needed to feel like us. As soon as Jake sent this song over, we could already hear our fans singing it back on festival stages this summer, which is always the most important part to us. “11 Beers” will have couples reminiscing on their first dates while tapping their toes to that four-on-the-floor beat – something not every country song is able to do!”

Together, this trio has delivered an anthem full of potential. Taking the listener back to memories of the one that got away, “11 Beers” is slated to become yet another massive hit for the incredibly deserving sibling duo.

To kick off 2022, not only have The Reklaws made a place for themselves with having yet another great anthem under their belt, they have also have secured, not one, but two coveted JUNO Awards nominations – Group or Duo of the Year and Country Album of the Year (Sophomore Slump). We wish them all the best on getting to take home the hardware for these nominations.

Related Items11 BeerscountryJake OwenJuno NominationsPenelopePRThe Reklaws
← Previous Story Singers For Hope unveil “This Is My Song – For You” to raise awareness for mental health
Next Story → Zach’s Picks of the Week – March 14, 2022 to March 19, 2022