Interview – The Boys And I 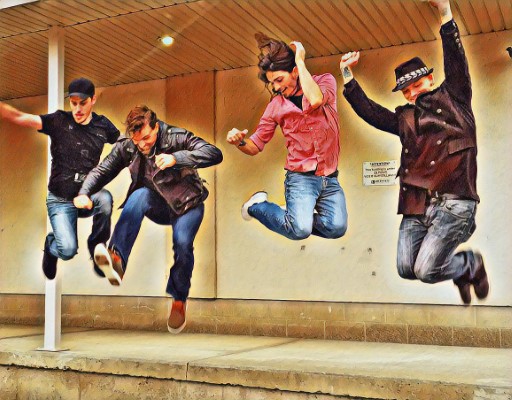 Kitchener, ON-based alt-rock band, The Boys And I have unveiled their new single, “White Hot”.

As the first riff of “White Hot” hits with a wallop, it’s immediately apparent that this four-piece band means big rock business. Then, when lead vocalist and rhythm guitarist James Blacktop digs into “You’ve got the passion, you’ve got the fire”, it’s signed, sealed, and delivered, baby.

What’s this song about? What a lot of fast and furious rock songs are about — and rightfully so.

“It’s always about a girl, isn’t it?” muses Blacktop. “Though there is the odd short story with a melody, the vast majority of our songs come from my hardships, insecurities, triumphs, and well… Trying to impress a girl.”

“White Hot” is the lead single that is sure to leave you wanting more. And you’re in luck, a five-song debut is set for release in Spring 2022. Recorded last fall at notable Uxbridge, Ontario’s Chalet Studio where the band could soak up the ambiance left there by Rush, Crown Lands, and Platinum Blonde to name a few, the all-original EP pulls from a sizable self-written cache of songs.

“Two of the songs were co-written with lead guitarist, Marc Reilly,” explains Blacktop. “Two of the other songs, however, got their beginnings lyrically as far back as 2008 and 2009. With around 30 original songs we rotate through during live shows, we got to pick the best of the best from our repertoire.”

In addition to Blacktop and Reilly, the other boys in this powerhouse band are bassist Adom Postma and drummer Nathan Bonassin. Prior to the pandemic, The Boys And I built up a burgeoning local following, stage by stage, that helped them mount a successful Kickstarter campaign to send them into the studio just in time to hit the ground of the impending re-opening of 2022 running and rocking.

Check out the video for “White Hot” below, and find out more about The Boys And I via our mini-interview.

Hey! So we are James Blacktop, Marc Reilly, Adom Postma, and Nathan Bonassin. Together we form….The Boys & I! We are an alternative / classic rock influenced band from Kitchener, Ontario. We kind of all came together piece by piece. James (Myself), answered an ad on kijiji from a band looking for a new lead singer. There, I met Troy, Luke, and Adom, who were all part of this, still nameless band. After rehearsing together for a few months we made our ‘debut’ at an open mic in Cambridge, ON. Not knowing what we were called yet, Adom wrote down, “The Boys & I” on the sign-up sheet. Thinking…you know, The Boys & I are going out and playing some tunes; the name pretty much stuck from there. After a couple line-up changes, quite a number, and the release of our first single, “That Ain’t Me Anymore”, we landed on our currently line-up in March of 2020.

What kickstarted the idea to write “White Hot”?

I, (James) kicked around this song first. I wrote it back in August of 2017 – in a gazebo in Thamesville ON. Having been a solo singer/songwriter type when I joined the band, I never thought this song was any good. I heard the song as somewhere between Jet and The Black Crowes, but was never going to get it off the ground as a one-man-band with an acoustic guitar. When I brought the song to the band, Adom knew it was a song we needed to follow through with, still I wasn’t truly convinced, shows what I know, eh?

What do you love about being in Kitchener?

All our favorite people are here. Our families, our friends, and of course the majority of our fans. It’s home. I’ve lived in other places over the years, (Vancouver, Hamilton) and though both places were very good to me, Kitchener has always pulled me back.

So, what happened to the girl that inspired the song in real life?

Funny you should ask that. There is usually a girl, isn’t there? 3 out the 5 songs on the EP have a story like that, just not this one. What I did have, was a drum beat stuck in my head. Also, tend to be the ‘balladeer’ of the group, and sometimes (like the others) I get sick of all the slow songs, and get to a point where I say to myself “you’ve written a lot of ballads lately, the next one needs to be a banger!”. So, long story short….there is no girl on this one, so if anyone wants to stake the claim for themselves you have my blessing. Truly, this one is for Adom, and uh…the fans. 🙂

I can only speak for myself on this one. But hands down, Bryan Adams. I’ve seen him in concert 4 times over the years. Most recently at the NYE celebration in Niagara Falls in 2019 / 2020. My mother always had his music playing in the house when I was a kid and most of it has stayed with me ever since. We have 2 or 3 of his songs that we rotate through our setlist, and come to think about it, “Everything I Do (I Do it for You), is the first song I remember singing publicly as a kid – doing Karaoke at a community center.