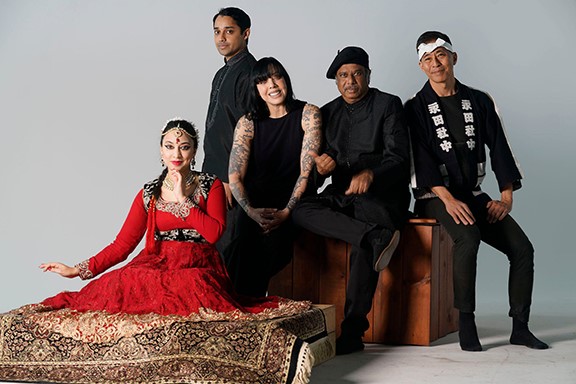 Celebrating their 30th anniversary, the song lands alongside Toronto Tabla Ensemble’s blistering new album, For the Love of Tabla — an 11-song LP that dazzles listeners start to finish with some of the best tabla playing in the world.

Their eighth studio release, TTE’s enchanting founder and artistic director Ritesh Das continues to put the tabla, a twin-hand drum popularized in northern India during the 18th century, in the spotlight.

“Normally the tabla gets lost or buried under all the other instruments in a song so, for this album, I mixed each track to bring the tabla up so you can hear it prominently within all the other sounds,” Das explains.

While the entire album defies expectations, a distinctive energy radiates from their latest release. “Prayer for the Mother” is a technically brilliant composition that draws on unique instrumental configurations that continue to assert TTE as a musical tour de force and one of Canada’s most prestigious and creative exports. The effortless fusion of rhythmic tabla percussion and rock n’ roll sensibilities serve as a sonic mechanism to communicate the tremendous power of woman and motherhood, and Canadian icon Bif Naked’s hypnotic lyrics accompany Das’s lightning-fast vocalizations to elevate “Prayer for the Mother” into the music stratosphere.

Beyond “Prayer for the Mother,” For the Love of Tabla is bursting with a worldly charm reflective of the diversity found in every musical moment, and an all-star cast of renowned artists assembles to bring TTE’s latest musical masterpiece to life.

All are welcome to commemorate Toronto Tabla Ensemble’s For the Love of Tabla, a CD release party is set to take place on March 19th at Toronto’s Harbourfront Centre Theater. Soul-stirring performances from TTE will be captured in-person and live-streamed beginning at 7 PM. Head to TorontoTabla.com/events for more information.

Watch the video for “Prayer for the Mother” below, and stay up to date with TTE via their socials.