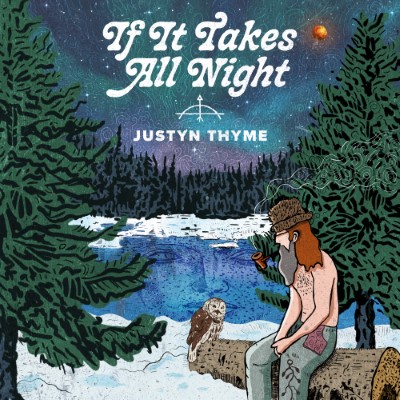 PEI-based singer-songwriter Justyn Thyme has unveiled his new single, “If It Takes All Night”. The single is a simple tune that points to the complex nature of thought and emotion when experiencing love, in all of its beautiful forms. Its upbeat tempo and lively instrumentation set a strong foundation for the vocal to soar, the harmonies to enrich, and the lead instruments to weave themselves tastefully to the final bell.

“This song came to me in a much different way than I’d experienced before. I was laying in bed one morning listening to a mumbled melody that I had recorded on my phone at some point in the middle of the night, which I had very little memory of. I started trying to translate the mumbled memo musings into language that might make more sense. I kept doing so in between morning’s rest in and out of a kind of dreamlike place and by the time the bulk of the lyric was written, I was already seeing how the song would be accompanied on the guitar. I picked it up, smoothed the edges a bit and there she was.”

Check out “If It Takes All Night” below, and find out more about Justyn Thyme via our Five Questions With segment.

Hi reader! I’m Justyn, I spend a lot of time trying my darndest to bring music to life, which I am absolutely obsessed with because the process of refining ourselves as instruments for the invisible will never end! How exciting. I also perform under the name Justyn Thyme. I’m very proud to be a child of Charlottetown, Prince Edward Island. There’s a lot of heart here, and I think it’s pretty apparent in the strength and diversity of the arts community. I have a bit of a hard time defining music, but if my music were a coffee, it would probably be close to an Americana. Music is such a magical force. There are very few things in this existence that are able to deliver our thoughts and feelings in such beautiful and dynamic ways.

“If It Takes All Night” came to me in a much different way than a lot of other songs that I’ve written. I was laying in bed one morning listening back to a mumbled melody that I had recorded into my phone at some point during the middle of the night, which I had very little memory of. I got to work trying to translate the mumbled memo musings into language that might make a bit more sense. I kept doing so as I laid there going in and out of some kind of dreamlike state and by the time the bulk of the lyrics were written, I was already seeing how the song would be accompanied on the guitar. I picked it up, smoothed the edges a bit, and there she was.

That’s a bit of a funny one. Before everything started shutting down I had recorded my first single, ‘Never Be Lonely’ with my good friend Logan Richard with no plans of releasing it. The track was recorded on our friend Adam Gallant’s computer (The Hill Sound Studio) and had just been sitting there unmixed until Adam took it upon himself to mix and master it when work was slowing down at the studio. I shared it with a few friends, and I was amazed by how much encouragement there was to release it and keep the momentum going, so I did. I released the song in September of 2020, so in a way this project was kind of born out of the stillness of the initial lockdown period. I’ve taken this time to touch base with the reason why I started playing music in the first place, and that is because it really helped me get through some of the toughest times in my life. If my music can offer even a glimpse of that for anyone, I am happy.

I think that would have to be Neil Young. My family name is Young, and I feel like if Neil and I went back far enough we may be able to find the link and make some music that would really rock the lineage. That, and I also admire most of what he’s done as an individual and an artist.

In a VERY close second would be Joni Mitchell, mostly because I think there’s a chance that we might be soul mates.

My goals for 2022 are to get my debut album released, get the live show cooking and start making moves towards sharing music in as many places as possible, meeting all the beautiful people, and being as studious as I can along the way. I’ve also always had a sort of fondness and curiosity for numbers, and 222 carries a LOT of goodness with it. It’s always darkest before dawn, as they say. We’re on the rise!