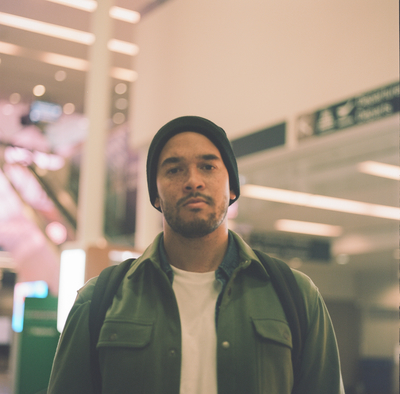 Chad is known to release stunningly cinematic and depth-laden music videos to accompany his releases, and “Weight” is no different. A video will be released next week, so be sure to stay tuned for that.

Check out “Weight” below, and find out more about Chad via our mini-interview.

Hi readers! I’m Chad. I’m a singer-songwriter based in Toronto (via London, On) and I write, play guitar, record, and perform music.

You have just released your new single, “Weight”, what can you tell us about the writing process of the track?

I wrote “Weight” in the studio where I recorded it in London alongside my friend and producer Matthew Johnston. A lot of my music is kind of smooth and pleasant sounding (for lack of a better word), so I wanted to make something that had some grit and edge to it. I grabbed Matthew’s Gibson electric guitar off the wall and started searching for riffs that felt kind of offensive in a way…or that had some serious attitude and teeth to it. I eventually found a riff and Matthew and I built melodies and structure around it that eventually led to the shell of the song. From there, the lyrics revealed themselves and it ended up being this dark, sexy, kind of scary R&B track lamenting about the strain that being on the road has on relationships and one’s grip on reality.

You will be releasing an accompanying music video for “Weight”, which was directed by Chris Evans, how was that experience? What was the highlight?

I love how the video turned out and it was awesome getting to work with Chris and his crew finally as we’ve been wanting to make something together for a while. It was kind of wild to shoot. I was able to secure a really cool location in Toronto at the Billy Bishop Airport pedestrian tunnel. It all happened last minute and we didn’t have a very big window of time to shoot, so we just went in there and got as much stuff as we could. We thought being trapped in this symmetrical tunnel with escalators and moving sidewalks was interesting visually and could serve as an appropriate environment to represent that dreamlike feeling of being stuck in mud or an endless loop. It’s almost like a carnival funhouse or something where things don’t appear as they really are. Chris and his crew did an amazing job of capturing that feeling perfectly and getting some really cool visuals. To top it off, we filmed it the morning of Halloween so everyone behind the camera wore costumes during the shoot. It’s hard to stay in character when your director is dressed as a peanut butter and jelly sandwich, but it was a lot of fun.

This is the third release from your current project, when can fans expect to have a full EP or album featuring these tracks?

I took a few years off from releasing music, so my main goal right now is to continue to release singles and generate forward momentum again. I think the first two singles really helped me to jump back onto the scene with a statement and reconnect with my audience and beyond. “Weight” will hopefully just amplify what I’ve been doing and get people more engaged and excited to hear this music in live settings later on this year.

More music…playing live shows again…and who knows, maybe even an album at some point…MAYBE!