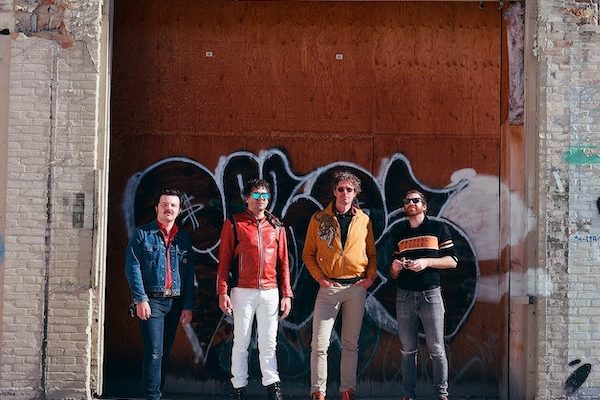 Winnipeg instrumental electric rock band Mahogany Frog has unveiled their single, “A Decision Of The Flower” from their upcoming album, Faust, which is an original score set to the eponymous 1926 German silent film.

Directed by F. W. Murnau, Faust is widely regarded as being among the greatest films of the silent era. It tells the classic legend of fate and temptation that dates back centuries. In this, their latest offering, Mahogany Frog brings together their collective experience in composition, experimentation, electronics, intense rock & roll, and searing fuzz guitar. Together they weave a dark and diverse score around Faust’s brooding tale of corruption, devastation, and redemption.

The first single from the album, “A Decision Of The Flower” tells the story of the courtship between Faust and Gretchen. Faust has traded his soul for knowledge, youth, and worldly pleasures. When he tires and becomes unfulfilled with this life, he meets Gretchen and tastes true love. This scene is the courtship of this new love.

“Gretchen’s love for Faust is foretold by a child’s game; just as it is steered by the Devil’s gambit,” says drummer/electronics wizard Andy Rudolph. “Gently pulsing electric piano interplays with each petal’s fall to the ground. But Beelzebub’s bass and the drums of chaos are close at hand. Multitudes of analogue waves lift the two lovers and carry them to their tragic fate.”

Watch the video for “A Decision Of The Flower” below, and find out more about Mahogany Frog via our mini-interview.

Graham Epp here from Mahogany Frog. We’re an instrumental four-piece with a love of texture and timbre and have been a touring and recording act since 2003. This March we’ll be releasing our 8th record and second double record in the past 12 months. Stylistically we’re all over the place. Fuzzy guitars, sprawling synths, and walls of electronics are what we use. We’ve played with Eric’s Trip, Caribou, the Besnard Lakes, Deerhoof, the Flaming Lips…

You have unveiled your first single, “A Decision Of The Flower”, what can you tell us about the track?

This is an excerpt from a soundtrack we composed for the 1926 German silent film, Faust. It’s a devastating movie by F.W. Murnau, who also made the film, Nosferatu. Faust is a very dark tale that deals with themes of death and selling one’s soul to the devil, among other unpleasantries, so our score reflects this doom and darkness. A Decision Of The Flower is found on side 3 of this double record and is one of the few moments where the mood of the film changes from devastation to a playful lightness. We decided to release this as an intro to the record (which comes out in its entirety on March 25th) partly because it is a nice concise song that stands on its own. Instead of searing fuzzy guitars and bombastic drums, as is the case for most of the soundtrack, this piece features warm Wurltizer electric piano and soaring synths. It is perhaps the most gentle song in our entire catalogue.

You have also released an accompanying video for the single, how did you come up with the idea behind the video? What was the highlight of making the video?

The video was made by Parker Thiessen, who also made the Faust album artwork and made a video for a song we released last year. He used footage from the film and made very tasteful edits that synch with our music. He then added bubbly psychedelic washes to the whole thing. It captures the beauty and softness of the scene and music. We are all extremely happy with the result.

You have announced the release of your new album, Faust. What can you tell us about the writing process of the album?

This music was composed and rehearsed over an intense three-month period in 2017 when we were asked to perform an original score to a silent film of our choice at Saskatoon’s Roxy Theatre. As work began we quickly realized the enormity of this project and booked a small tour around it, performing at historic cinemas in Western Canada. Most of the themes were written specifically for the film while others, like A Decision Of The Flower, came from other ideas I had floating around at the time. There is a section of the soundtrack that we omitted from the record because we arranged it differently for our regular live performances and ended up as the entire side 4 of … In The Electric Universe, another double record we released last year. Our approach to this record was very different than our previous ones. Each of our performances on the cinema tour were recorded and formed the map of the record as we added to it in several different studios over the next 4 years. It’s a real mash-up of studio and live recordings. I can’t even tell what’s live and what’s studio sometimes.

In the past, after we’ve released a record, we’ve concentrated on our other projects. We’re all in other bands that both perform and record so it seems like we’re in a constant state of creating something new. We will be performing in the autumn as Mahogany Frog but before that we’ll be releasing a live performance video that we recorded earlier this year. It won’t be your typical concert video. It’s a creation by our pal and experimental filmmaker, Colby Richardson and will be a complete digital assault on your eyes.