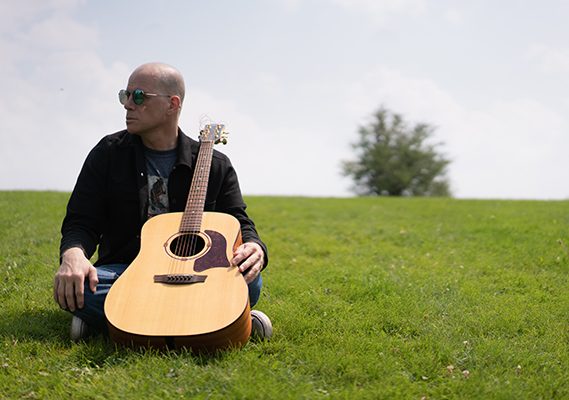 Toronto, ON-based progressive-pop artist Chris Sunfield has unveiled his new single, “Tomorrow’s Here (Far Away Objects Mix)”, along with a lyric video to accompany the release.

“Lyrically, the new release is a clarion call to live authentically, and realize one’s full potential before it’s too late — all while accepting that life’s achievements are sometimes gained at the expense of intimacy,” he explains.

His ability to convey kind, yet transcendent messages through a medium like music gives “Tomorrow’s Here (Far Away Objects Mix)” a unique edge in its genre.

“‘Tomorrow’s Here’ is about moving beyond losses and challenges, and continuing to grow as a person.”

Watch the lyric video for “Tomorrow’s Here (Far Away Objects Mix)” below, and find out more about Chris via our mini-interview.

I’m a psychologist-turned-recording artist. Weird but true. I started writing music in high school and dreamed of being a recording artist like everyone else. I got into a university music program but struggled because I’m self-taught and didn’t read music. So I switched majors, got a PhD, and went into management consulting. That could have been the end of the story.

Years passed. I regretted having hundreds of half-written songs on fading scraps of paper and deteriorating tapes. Oliver Wendell Holmes said “Most people die with the music still inside them”, and my big box of music would have gone into landfill if I had died suddenly.

Then came a perfect storm: Close friends died. A colossally bad career change. A move to a remote area isolated me from friends. Finally, an accident hospitalized me. It was rock bottom. I was a behavioural scientist facing my own dark night of the soul. As a way of coping, I dug out all of my gear and recorded my first song from start to finish in many years. It re-awakened me and led to my unexpected reinvention as a recording artist.
To date, I’ve released five singles and the Far Away Objects EP. Four more singles are in the works for another EP this year. I’m answering a calling, but it’s a race against time. I’m a later-life artist with over 700 musical ideas from decades of procrastination and doing something else for a living. I wonder if I’ll be gone before much of it is realized. I’m going to have to collaborate more.
I write all lyrics and music and arrange for other instruments. I sing and do all the guitars, as well as some bass and keyboards. I own 12 guitars and want more. I have a drum kit in a closet that I’m staring at right now with longing (I’m in a condo). I’m also a world-class assassin. Wait, did I type that or just think it?

What made you go back and want to re-record “Tomorrow’s Here”?

Disappointment. The first version released in October didn’t match what was in my head. When the idea for the Far Away Objects EP came about, I just knew that my vision for the song HAD to be the single off that. I got the multitracks from the studio, went to Michael Hanson with whom I had worked before, and re-fashioned it. I can’t put into words the delayed feelings of accomplishment. I released the Far Away Objects mix of Tomorrow’s Here as a single on New Years Eve day, so the lyrical message of ‘becoming the new you’ tomorrow was hyper-relevant. I promoted the new mix with tips for personal development and reinvention, so my psychologist side came through.

What did you learn about yourself recording “Tomorrow’s Here (Far Away Objects Mix)”?

Well first, when I was writing it, I re-learned that I can create something out of adversity. I found out that a long-term mentor had died. I never had a chance to thank him or say goodbye. Twenty-five years of friendship just vanished. Then, I had to have a beloved pet put to sleep. I finished writing and demoing the song all day and night after he died to distract myself. The sun was rising the next morning when it was done, so tomorrow truly was here. The lyrics are about moving beyond past losses and continuing to grow as a person. When recording it, I learned that I have to work with people that hear my vision for a song – the kind of people that ‘finish my musical sentences’.

What’s a perfect day for you?

This may bore a lot of people. I still lead a double life, so a perfect day starts with knowing that I can put on only one hat and not be distracted by calls or emails to my alter ego. There also has to be exercise (gym or kettlebells). The rest of the day is getting down into in a deep state of ‘flow’ with whatever I’m working on. Evening is drinks (e.g., martinis), a movie (e.g., vintage horror, classic Hollywood, silent films – yes, really), and reading in bed. I have a PhD, but admittedly, I sometimes re-read The Hardy Boys from my youth to decompress (I know many adults read Harry Potter, so there). The cheerleading squad usually arrives by eleven and keeps me occupied until morning. Just kidding…..maybe.

Neil Young. Massey Hall. January 19, 1971. There’s no video but the music’s been out for 15 years. I would have loved to have felt the energy in the room. Some of the songs ended up on Harvest and were heard for the first time at that show. If I could go back in time, I would also see Edward Bear, Klaatu, Lighthouse, and FM.