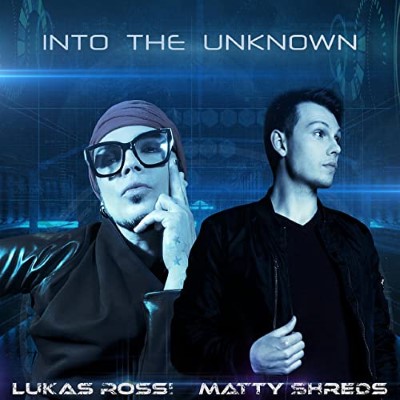 Ontario-based multi-instrumentalist, Matty Shreds has teamed up with Rock Star: Supernova winner, Lukas Rossi on the new single, “Into The Unknown”.

Matty & Lukas connected in 2017 for a short tour run in Ontario, Canada. After a successful tour and evident chemistry, the two become extremely close. Following up on multiple collaborations on Rossi’s latest record Autonomic — an album dedicated to Matty’s health condition called Dysautonomia, the two are back at it with “Into The Unknown” and they didn’t hold back!

“Into The Unknown is special. It’s one of the best songs I’ve ever been a part of. There’s a vulnerability to this track that I haven’t shown in previous releases. It comes from an extremely real place, and I think people will feel that.”

Matty is currently in the process of writing his own album called Mind Games, set to be released later this year.

Check out the video for “Into The Unknown” below, and find out more about Matty & Lukas via our Five Questions With segment.

Lukas – I am a lifelong artist, my son and my relationship with God are very important to me. I am in a creative headspace most of the time, in my downtime I like to Netflix and chill lol. You can also Google me, just kidding lol.

Matty – In the beginning, there was Adam and there was Eve. No, just kidding. My name is Matty Shreds. I’m a Multi-Instrumentalist/Producer from Ontario, Canada! Music has been my escape for longer than I can remember — its impact on others alike is incredible. The starting point of my career was predominantly based around a few dudes in my High School that shredded on guitar — I thought it was the coolest thing on the planet. However, after learning the depths that music offers, it became a lifestyle that I couldn’t walk away from.

Lukas – My most recent album release Autonomic is very special to me, it brings awareness to the invisible illness called Dysautonomia. The songs on that record were ones that I was waiting for the perfect time to release. Partnering with Seventy7 Records made this happen, the title track Autonomic has a great story about how it came to fruition.

Matty – As I’m typing this, it’s currently February 27th, so that makes my most recent release “Into The Unknown” — Ironically that release features Lukas Rossi. Thematically it’s Sci-Fi meets Rock/Metal, with old-school Jared Leto vibes. As a die hard 30 Seconds To Mars fan, it’s almost strange writing music that sounds more like 30stm, than 30stm does… Likely partial to the fact Lukas walks among the minority, who actually still care to capture soul/emotion in a vulnerable way. On March 25th my solo album “Mind Games” is being released on all major platforms. That’s a super exciting project that I’ve been working on.

Lukas – I’m performing weekly shows on a digital platform called Stageit. I also offer Zoom afterparties to keep connected to the fanbase on a personal level, and I am no stranger to Facebook live as well.

Matty – Thankfully I’ve never really been in the public eye, so I’ve basically managed to remain a ghost throughout all of this. In all seriousness, it has been a massive adjustment mentally. Over the past 3-4 years, I’ve suffered with chronic illnesses, so the probability of an unfavourable outcome due to the virus is significantly heightened.. However the hardest part I feel is seeing how it has impacted others that aren’t overly seasoned to the “life from home” lifestyle. It’s sad seeing those you love the most, stripped from doing what they love, and most heavily, losing loved ones. Aside from online toxicity, the internet has been an incredible place for artists to build much deeper and more personal relationships with their fans.

Lukas – Great question, it’s difficult to choose just one. Neil Sanderson from Three Days Grace and I worked together a few years ago as King City and we have re-recorded our single Neurotic that was just released with Three Days Grace. I have also worked with Tom MacDonald many years ago in the past and I would love to collaborate with him again. It would be cool to work with Raine Maida from Our Lady Peace and The Weeknd.

Matty – This is a solid question. The only 2 artists left that I have a huge desire to work with someday are Adam Gontier and Trevor McNevan. I feel Lukas and those 2 are probably the best rock singers from Canada. Would be an incredible accomplishment to have tracks released with my top 3 favourite Canadian singers.

Lukas – 2022 is and will be the most pivotal point of my career. I’m going to be releasing music no one ever would expect to come from me 🙂

Matty – I want to write music for Film & Video Games. If my health permits it, this will be my primary focus over the next 5-10 years. Above all else, that’s my biggest dream currently.