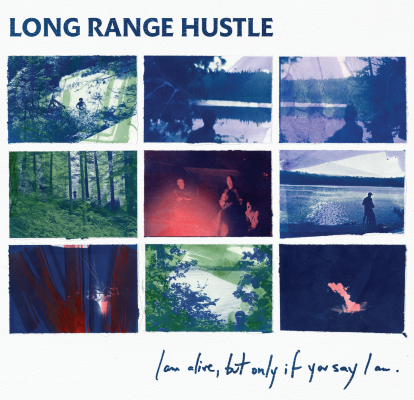 I am alive, but only if you say I am is the latest album from Toronto-based band, Long Range Hustle.

The arrangements of I am alive, but only if you say I am are complex, but with an ease and confidence, that feels truly effortless. According to their bio, the five-piece indie band grew up together in the woods of small-town Ontario and that really shines through in their music. For instance, the arsenal that makes up the band’s sound (vocals, backup vocals, guitar, violin, synths, keys, drum, and bass) are often playing at the same time, but still manage to not sound discordant or overwhelming – instead, they form a well oil machine that only increase the energy and grandeur of the soundscape. You really feel the history of a band that has been jamming together for a long time on this album. The topics of the album are universal, mostly focusing on relationships and the general stresses of living, yet the lyrics are dense and poetic. Probably my favorite line was from the track, the Comeback Kid, which defiantly says “I wanna go to heaven with a bad word written on my wrist.”

A standout for me on I am alive, but only if you say I am was the track “Half Speed”. The track starts with a rain shower as the lead vocals repeat “It never gets easier, I hope it never does.” The track then quickly transitions into its full accompaniment, including handclaps, cheerily encouraging the lead vocals along. The verses outline various chores like taking out the trash, cleaning the freezer. Repetitive tasks, not unlike the repeating chorus, never get easier.  There’s a hint of more going on than simply monotonous tasks, though, with lines like how the singer “stare[s] at a month worth of mail on the floor” and “recycle the plastic cans like you’d be asked to do before./ You don’t ask anymore.” A listener could imply or project a lot of meaning onto these lines – could this be a reference to living after a loved one passed? A failing marriage? Managing a partner with depression? The brilliance of the track is it could mean all of these things or none of them. Either way, the upbeat tone of the song seems to be trying to inspire us to keep at it, because even if it never gets easier, that doesn’t mean it won’t be better. Instead, like the track’s title and bridge note, we should take things as half speed we need to in order to “Take all the time that you’re owed.”