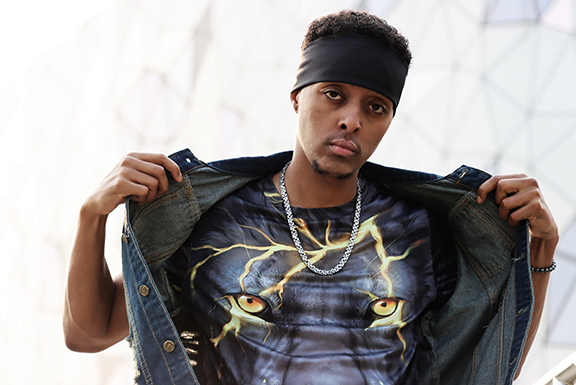 The freshly cut single is set to be featured on his forthcoming album, WILDCAT — a release that will be “composed of songs that are personal and relatable, as I delve deep into my journey as a child born and raised in Ethiopia and moved to Canada as a young teen,” Rawmny reveals. “My life has been full of adventure and many challenges I had to overcome to get where I am today.”

Harkening back to the radio bangers that nothing short of defined the early aughts, “Fearless” is an amalgamation of Ludacris and Lil Wayne’s production styles — with a splash of Rick Ross for flavor.

Couple that with a feature from Rawmny (pronounced Raw Money) Wildcat’s close collaborator and friend, CHXXX, and you’ve got a recipe for success.

Finding himself quarantined during lockdown, as much of the world did, it was after being exposed to COVID and not sure what to do, or how to kill two weeks in solitary, that “Fearless” was written and recorded.

“While I was home, I was talking with CHXXX, who is a frequent collaborator and friend,” he recalls. “We got amped over a beat I was playing that was sent to me by my producer-friend from Chicago, Clark Make Hits. Chxxx really liked the hook, and he wrote his verse on the spot during that call.”

Turning a somber time in quarantine into a productive and empowering moment, the two got to work recording their verses. With seemingly all the time in the world, Rawmny Wildcat collected the takes and sent them over to producer and hitmaker, Clark Make Hits.

“I was glad I had my mic with me. I was able to record the song and make good use of the time. We both recorded our parts and sent the files over for mixing soon after.”

The spirit of triumph is deeply rooted in the production process of “Fearless”; the story of overcoming tribulation and creating a full-scale production during the heart of the quarantine isn’t lost on listeners looking for deeper meaning in the song.

Check out the lyric video for “Fearless” below, and stay tuned for his upcoming album, WILDCAT due in Spring 2022.

Also, find out more about Rawmny Wildcat via our mini-interview below.

I am Rawmny Wildcat, Toronto based musician. I am an artist/producer currently releasing music through a joint venture with my own label Wildcat Records and Motive Music Canada.

What did you learn from moving from Ethiopia to Montreal and now Toronto that you still use today?

Moving homes is not an easy process, even within the same country. Migrating to a new country is something that most people would prefer not to do unless they have to. I lost touch with my friends and extended family, I went through the process of culture shock and at times went through extreme inconvenience only with the hope of a better future.

In the process, I learned a new language (French). I also learned how to adapt into a different mentality in order to survive and thrive in my new home. I had to let go of some of my old beliefs and mental programming, as well as some of the ways of living that I was accustomed to. That is because surviving in Canada requires me to adapt to my new situation.

Tell us about the making of “Fearless”. What started the idea?

I wrote and recorded this song while I was in quarantine during lockdown. I had been in contact with someone who had Covid so I had to stay locked in my room for 14 days, even though I was not showing any symptoms. I understand it was necessary to do the time in quarantine, but I was very upset because I had a trip planned to go to New York to promote my then upcoming single “Still Standing”, which was released Nov 12 2021. I had to cancel my trip and stay at home.

While I was home in my condo in Toronto, I was talking with Chxxx who is a frequent collaborator and friend. He related to me over the situation because he had a similar occurrence happen to him in the summer of 2021. We got amped over a beat that I was playing that was sent to me by my producer-friend from Chicago, Clark Make Hits.

Chxxx really liked the hook as he heard me singing it over the phone and he wrote his verse on the spot during that call.

Good thing I had my mic with me, so I was able to record the song and make good use of the time.

We both recorded our parts and sent the files over for mixing soon after.

For the past 10 years, I’ve always listened to motivational speeches to start my morning. I think the speech I was listening to that morning had me feeling ready and pumped to take on whatever challenge I was facing.

What, if anything, are you actually scared of?

My greatest fear has to be dying with unfinished business. Regrets are the worst. I do not have any huge regrets in my life so far and I don’t plan to add any. And the regret of not having tried to do something is worse than trying and failing at it.

This might be unexpected, but I have always been a fan of Fefe Dobson. I hope I get to see her perform someday soon.