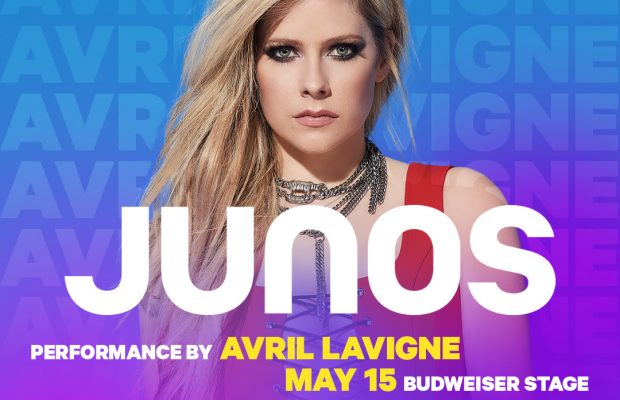 The star power of the first, in-person JUNO Awards in two years just got a lot bigger!

Following the reveal of the 2022 JUNO Award nominees, the first performers for the May 15th celebrations at Toronto’s Budweiser Stage were announced.

For the first time since 2008, nine-time JUNO Award winner and Canada’s reigning pop-punk princess, Avril Lavigne, will be on hand to celebrate the 20th anniversary of her debut studio album, Let it Go. Joining Lavigne will be the newest Canadian pop icon, Charlotte Cardin; who was nominated earlier in the day for a record six JUNO Awards, including Breakthrough Artist of the Year, Single of the Year, and Album of the Year. Singer, songwriter, poet, and filmmaker, Mustafa, will also make his JUNO Awards debut this year after receiving his first nominations for Alternative Album Of The Year and Songwriter of the Year.

In addition, following their immensely successful run of shows at the Budweiser Stage in August, seven-time JUNO Award winners, Arkells, will return to celebrate their 2022 nominations for Group of the Year and Rock Album of the Year for Blink Once.

After the 2020 and 2021 festivals and ceremonies were scrapped in the wake of first waves of the global COVID-19 pandemic in favour of virtual presentations, the 2022 JUNO Week will take place from May 9th to May 15th, with the culminating broadcast of the 51st annual JUNO Awards returning to a live setting on May 15th from Toronto’s Budweiser Stage. The 2022 JUNO Awards will broadcast live across Canada at 8 p.m. ET/5 p.m. PT on CBC TV, CBC Gem, CBC Radio One, CBC Music, CBC Listen, and globally at CBCMusic.ca/junos.

For more information and to keep up-to-date with all the 2022 JUNO Awards celebrations, please be sure to visit www.junoawards.ca.